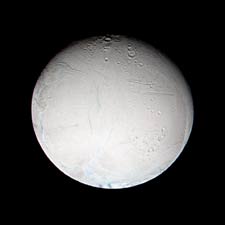 Enceladus, seen here in a false-color Cassini image acquired on February 16th, appears to sport a tenuous atmosphere. But scientists still aren’t sure of its composition.

As NASA's Cassini orbiter continues to weave its way around Saturn's satellites, each moon rendezvous provides scientists with a wealth of new information. Though images from its main camera, the Imaging Science Subsystem, have largely stolen the spotlight, the craft sports 11 other instruments that are busy collecting data during each encounter. One of these, the magnetometer, has discovered an atmosphere around Enceladus.

On February 17th Cassini flew within 1,167 kilometers (725 miles) of the icy, water-rich moon. On March 9th it made an even closer approach, buzzing by the surface at only 500 km. Both times, magnetometer principal investigator Michele K. Dougherty (Imperial College, London) and her team were closely watching Saturn's magnetosphere to see how it interacted with Enceladus.

What they saw looked very similar to prior observations near Saturn's largest moon, Titan. "Saturn's plasma and magnetic field is draped around Titan," says Dougherty. "Titan's atmosphere acts as an obstacle to the plasma from Saturn." 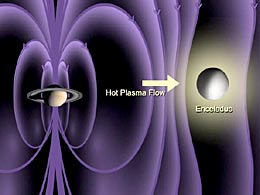 This artist's rendition of Saturn's magnetosphere shows how the ringed planet's magnetic field lines bend around Enceladus. By closely monitoring the interaction, scientists deduced that the icy moon has an atmosphere that acts as an obstacle to the flow of plasma around it.

As news of the reported atmosphere broke during this week's Lunar and Planetary Science Conference in Houston, Texas, the scientists at the meeting were abuzz. Enceladus is a small moon, only about 500 km across. It doesn't have enough gravity to hold onto an atmosphere for a long time. Something needs to replenish the detected material consistently. While the source remains unknown, a leading candidate is outgassing from ice volcanoes.

"If a moon [other than Titan] was going to have an atmosphere, Enceladus is it," says Cassini team member Ralph D. Lorenz (University of Arizona). The source could be lingering heat from an ancient heating event. Scientists know that Enceladus experienced extreme tidal flexing in its past. Perhaps the moon is still cooling down and giving off "steam."

Whatever the mechanism is for producing atmospheric particles, it needs to provide plenty of them. The magnetometer data suggest that Enceladus's atmosphere is thicker than expected — about one moon diameter in extent. But Dougherty says the atmospheric density estimate could still change. "We really don't know the answer yet," she admits. 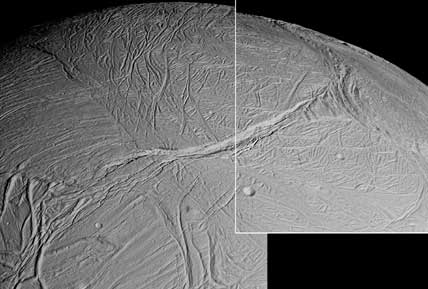 Surprisingly, scientists still haven't learned what the atmosphere is made of. Another Cassini instrument, the Ultraviolet Imaging Spectrograph (UVIS), was built to identify elements that shine in ultraviolet light, a region of the spectrum where gases and elements surrounding moons should radiate brightly. Yet UVIS hasn't detected a single atmospheric element around Enceladus. "We really expected to see an atmosphere," says UVIS investigator Candice J. Hansen (NASA/Jet Propulsion Laboratory).

In February the UVIS team watched as Enceladus occulted the star Lambda Scorpii. During ingress and egress, the star should have illuminated elements in the moon's atmosphere. Unfortunately, "our data show that there is no obvious sign of an atmosphere," says Hansen. "It was just below our detection limit."

The UVIS team will attempt to look again in July when another stellar occultation should light up the purported elements encircling Enceladus. Before then, the magnetometer and ultraviolet instrument groups will combine forces to solve the puzzle. "We're going to try to work it out together this spring," says Hansen.