Something happened yesterday that could upend the bragging rights among the kingpins of trans-Neptunian space. If the early results hold up, this time it's the dwarf planet Eris's turn to be demoted, and Pluto might have just regained its status as the largest object in the Kuiper Belt. 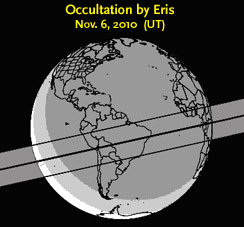 The final prediction for an occultation by Eris yielded a track across northern Chile, home to many professional observatories.

The scene for this drama is high in the Chilean Andes, where yesterday three teams of astronomers caught Eris in the act of passing directly in front of a 17th-magnitude star in north-central Cetus. Astronomers had known about this occultation well in advance, but the predicted path had shifted up and down along South America, leaving astronomers unsure who — if anyone — might see the event.

Well, the news from Chile is that three observing teams, all using relatively modest telescopes, saw the star blink out.

According to Emmanuël Jehin (University of Liège, Belgium), who tracked the event with the 24-inch (60-cm) TRAPPIST telescope at La Silla Observatory, "I got seven frames where the light of the star is gone." Since the images were taken 4½ seconds apart, Jehin says the occultation lasted about 27 seconds.

Images taken every 4½ seconds clearly show the brief disappearance of a star behind the dwarf planet Eris on November 6, 2010 (Universal Time).

Then word came that the occultation had been witnessed by two more telescopes some 460 miles (740 km) to the north. Sebastian Saravia, Alain Maury, and Caisey Harlingten saw the star disappear for 76 seconds through Harlingten's 20-inch (50-cm) PlaneWave telescope at the San Pedro de Atacama Celestial Explorations Observatory. (Maury's account of the event is here.)

The outage was also recorded by a remotely operated 16-inch (40-cm) telescope in another dome at the SPACE site, under the control of Jose-Luis Ortiz (Institute of Astrophysics of Andalusia, Spain). You can view a clip of the IAA group's occultation video here.

Any positive result would be cause enough to celebrate — never before has an occultation involved an object so far away. But successful observations from widely separated sites create two chords across Eris's shadow that yields a unique solution for its diameter (assuming that the object is spherical).

This video from a 20-inch telescope at San Pedro de Atacama Celestial Explorations Observatory shows how Eris briefly covered a 17th-magnitude star during an occultation on November 6, 2010. (Video frame rate is faster than real time.)

That number, according to Bruno Sicardy (Paris Observatory), is hard to pin down exactly because timings derived from the three telescopes' light curves have some uncertainty. Even so, Sicardy notes in an email, "Almost certainly Eris has a radius smaller than 1,170 km" — and that would make it ever-so-slightly smaller than Pluto, whose radius is thought to be 1,172 (±10) km. Don't be surprised if the final value gets pushed another 50 or 60 km lower.

"This is huge," notes occultation guru David Dunham. And you'll get no disagreement from Mike Brown (Caltech), who headed the team that discovered Eris several years ago. "Most of the ways we have of measuring the sizes of objects in the outer solar system are fraught with difficulties," Brown notes on his website. "But precisely timed occultations like these have the potential to provide incredibly precise answers."

We've gotten comfortable thinking that Eris is larger than Pluto, and why not? That's what Wikipedia says, so it must be true! Seriously, images taken in December 2005 by Brown and others with the Hubble Space Telescope indicated a diameter of 1,500 miles (2,400 km), just 5% larger than Pluto's.

A partial frame recorded during the occultation using a 16-inch (0.4-m) telescope operated remotely by astronomers from Spain's Institute of Astrophysics of Andalusia. Click on the image for a video of the event.

But the true size remained uncertain because even Hubble's supersharp gaze is only barely able to resolve Eris's disk. (Remember: it's some 9 billion miles from the Sun, three times as far away as Pluto.

Observations made with the Spitzer Space Telescope yielded a diameter nearer 1,600 miles (2,600 km), and another group, using the IRAM radio telescope in Spain, upped the value to something closer to 1,900 miles (3,000 km). However, astronomers now realize that Eris's spin axis is pointing toward the Sun, an aspect that would keep the sunlit hemisphere warmer than average and skew any infrared measurements toward higher values.

The relatively brief occultation (it had been predicted to last nearly 2 minutes), combined with negative observations from a pair of telescopes in Argentina, suggested right away that Eris wasn't as large as thought. So the outcome from Chile is actually more in line with the Hubble result from 2005. 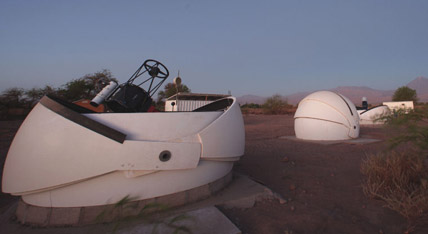 Eris's mass, determined from the orbit of its moon Dysnomia, is about 125% that of Pluto — and that's unchanged. So if the occultation results hold up, then the density of Eris must be higher, 2.5 g/cm3 or more, and its albedo (reflectivity) at least 90%.

"A year ago I would have declared that result to be thoroughly crazy," Brown commented today via email, "as it just seems unreasonable that Eris would have a density that high" — though he adds, "The albedo is already so ridiculously high that just a little more ridiculousness is OK." But earlier this year Brown and others found that the largish Kuiper Belt denizen 50000 Quaoar is essentially a dense rock (averaging at least 3 g/cm3). "So I would say that densities, too, are up in the air," Brown comments.

One more thing: occultations are very powerful probes of whether an object has an atmosphere, and for now all the team members I contacted are mum on whether Eris has one. The object's high albedo, combined with its great distance, suggests that the surface must be absorbing too little sunlight to vaporize any ice present there. But astronomers were shocked to find (during an occultation in 1988) that Pluto has a thin atmosphere — so stay tuned!

If the TRAPPIST telescope's camera was integrating its exposures for 4 1/2 seconds, or a significant fraction thereof, we can get a better estimate of the total time the star was occulted. From the images included with this article, it appears the star is completely "out" for 6 frames, and 6 x 4 1/2 seconds equals the 27 seconds quoted in the article. The 7th frame shows the star, but it is dimmer than in the un-occulted frames. This would indicate the star was occulted for part of the integration time of the 7th frame. Assuming Mr. Jehin and his collegues are able to do a bit of photometry on that image, they can deduce for how much of that 7th 4 1/2 seconds the star was occulted. Assuming a middle value of 2 1/4 seconds for this 7th frame occultation, it would indicate an occultation lasting 8.3% longer than the 27 seconds quoted. If the size of the object was based on a 27 s occultation, an 8.3% increase in time would imply a similar increase in radius of 100 km, or a radius of 1270 km, more in line with Hubble's data and expected densities. Apologies if Mr. Jehin et al have already factored this in.

In the article, you state that the diameter of Pluto was 1172 +/- 10 km, but it should be "radius", as quoted for Eris. I was initally a bit confused as to why Pluto should have shrunk so much since I last heard that it was about 2390 km in diameter, with even Charon at 1200 km.

This current story seems to agree nicely with your story from 3 weeks ago about new modeling of solar system formation, where minor planets are scattered back and forth between inner and outer orbits. Whereas traditional thinking dictates low-density icy objects far away, we now find rocky planetesimals that probably got kicked away from the inner solar system.

Neither Pluto nor Eris are "minor planets," which is a synonym for asteroids. They are two of a third class of planets, the dwarf planets, which very likely may be the most numerous in the solar system. As unrealistic as it sounds, we should fund a robotic mission to Eris as well as to Haumea and Makemake, similar to New Horizons. Yes, these would take more time than New Horizons' nine-and-a-half years, but the only way we can learn the characteristics of these objects with certainty is to go there.

Please tell me why there is a sumbliminal flash message in the midst of the Alain Maury gif?
And if you have captured it perhaps you can share what it says?

Within the error of the observations, Pluto and Eris are right about the same size. They must have the same origin - a Lagrange point (L4 or L5) of Neptune. We're getting to the point where if the star happens to cross a mountain or valley, we will get the impression that one or the other object is much larger or smaller than the other.

A question I have about the mass of the objects is the density of Dysnomia. If it's the radical solution and it's a chunk of iron that will have all kinds of implications.

@ Laurel, maybe we can get some Americium 242m from the Israeli arsenal and get this mission there quicker?

Let's have a "Well Done" for the astronomers who arranged things so they could get a vote for Eris (Eros of money) as a planet. Yes, you heard me love of money and kicked Pluto out on its tail.

That is what should be done to the astronomers that committed this travesty. I'm a novice astronomer but I know nonsense.

Love of money causes all this stuff and I snicker because their embarassment is due retribution.

You can bet they will do everything they can at the expense of others for their CASH COW.

Scottib, the subliminal message in the Alain Maury gif says "Occultation by 136199 Eris San Pedro de Atacama Celestial Exploration November 5th 2010". You can either believe me or try to measure the time it takes to loop and get a screenshot yourself!

Scottib, the subliminal message in the Alain Maury gif says "Occultation by 136199 Eris San Pedro de Atacama Celestial Exploration November 5th 2010". You can either believe me or try to measure the time it takes to loop and get a screenshot yourself!

First of all, does the occulted star have a name / catalog number, or did I just miss it?

You said it happened in Cetus, which is 90Âº away from the galactic plane, so the star is more likely to be moving across our field of view than towards or away from us. I wanted to look up its proper motion and direction, since the angular movement of Eris in 24 seconds is so VERY small that maybe a fast star might skew these results. Even if Eris moves five times as fast across the sky, that still can introduce a 20% error in Eris' calculated diameter.

My question is: is this a necessary correction, or are the apparent motions of these two objects so VERY different that the star's motion is negligible?