ESO Celebrates Its History and Future

On October 5th, the European Southern Observatory and the Australian Square Kilometer Array Pathfinder will broadcast live webcasts to celebrate years gone by and new beginnings.

In remote corners of the Earth, the world’s largest telescopes open a window to the most distant reaches of the universe. Superscopes like the European Southern Observatory’s Very Large Telescope array and the Australian Square Kilometer Array Pathfinder make up an important part of astronomy’s past and future. And on October 5th, you can be part of their celebrations. 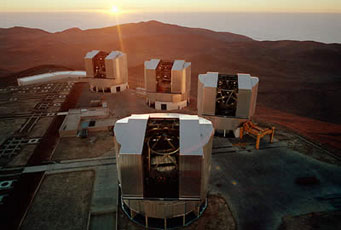 The four telescopes that form the Very Large Telescope array perch on top of the Paranal Mountain in Chile's Atacama Desert. On October 5th, the VLT will, by popular demand, take a look at Thor's Helmet Nebula.

On October 5, 1962, five European countries — Belgium, Germany, France, the Netherlands, and Sweden — signed the European Southern Observatory Convention, making a commitment to build a jointly owned observatory in the Southern Hemisphere. In 1964, the site of the ESO’s first observatory had been chosen: the southern part of the Atacama Desert. By 1966, La Silla’s first telescope, a 1-meter, had already begun observations.

The ESO now owns three sites in Chile, La Silla, Cerro Paranal, and Llano de Chajnantor, home to the New Technology Telescope, the Very Large Telescope array, and the Atacama Large Millimeter Array, respectively, as well as many more telescopes besides. The VLT is ESO’s flagship telescope. Its four 8.2-meter telescopes are named Antu, Kueyan, Melipal, and Yepun, after the Mapuche names for the Sun, Moon, Southern Cross, and Venus. With all four telescopes combined, the VLT array becomes the largest optical and infrared telescope in the world. Its incredibly sharp vision resolves objects just 0.001 arcseconds apart. 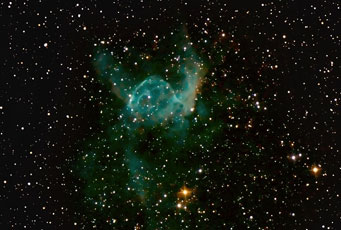 Thor's Helmet, as captured by John Ambrose, who submitted this photo to our online Photo Gallery.

And on October 5, in celebration of the ESO’s 50th anniversary, the eyes of this powerful telescope array will be trained on an object selected by popular vote: Thor’s Helmet Nebula. (The picture to the right was taken by John Ambrose, who submitted it to our online Photo Gallery.) The ESO will host a live webcast from 5 a.m. to 11 a.m. EDT featuring the VLT observations, as well as talks covering the latest news about astronomy research.

Check out full schedule of events, or watch the live webcast: A Day in the Life of ESO.

Question and answer sessions are peppered in between other events, and iIf you want to ask questions before or during the webcast, you have a couple of options. You can send an email to [email protected] with the subject line ESO50years, send a tweet @ESO and including the hashtag #ESO50years, or write a question on your Facebook wall and tag ESO’s Facebook page. (The last option one requires that you “like” ESO’s Facebook page before posting.) 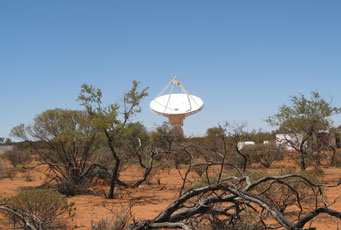 The first antenna of the Australian Square Kilometer Array was erected in January in remote Western Australia. The ASKAP celebrates its opening ceremony on October 5th.

The ESO won’t be the only one celebrating on October 5th. The Australian Square Kilometer Array Pathfinder will mark its opening ceremony with another live webcast.

The ASKAP is the pathfinder telescope for the larger Square Kilometer Array, which in a few years will be the world’s largest, fastest, and most sensitive radio telescope. The Pathfinder, opening on Friday, already has 36 identical antennas, each of them 39 feet in diameter, ready to capture radio images with unprecedented sensitivity and speed over large areas of the sky.

Because the webcast comes from Australia, it comes at a somewhat awkward time for U.S. viewers: 12 a.m. EDT on Friday, October 5, but perhaps it’s worth a late night. When midnight rolls around, click the link to watch the live webcast of ASKAP’s opening ceremony. Or if you don't want to stay up that late, watch other ASKAP videos instead.

The text of the article indicates there's an image of Thor's Helmet by John Ambrose "on the right." However, I don't see it anywhere (as of 11:10 am EDT, October 4th).

I've fixed the image, Joe, you should be able to see it now.