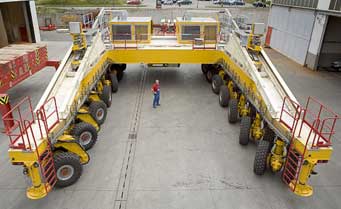 Weighing in at 130 metric tons, this first of two transports will move the 7- and 12-meter antennas of the European Southern Observatory's Atacama Large Millimeter / submillimeter Array (ALMA). Click on the image for additional views.

It's not quite as impressive as the crawler used to bring the Space Shuttle to the launch pad, but the European Southern Observatory has developed its own massive transport to move individual telescopes for the Atacama Large Millimeter / submillimeter Array (ALMA) Observatory being built in Chile.

The transport has passed its initial tests. Now it just needs some antennas to carry. I won't be surprised if sometime in the future it will be featured on the History Channel's Modern Marvels series. For details and more photos, see the ESO press release.