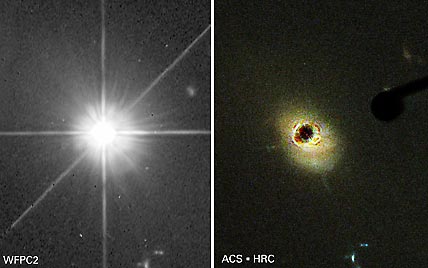 3C 273 is no ordinary 13th-magnitude 'star.' It's the sky's brightest quasar, visible in a 6-inch backyard telescope 2 billion light-years away in Virgo. As this pair of images from the Hubble Space Telescope shows, the quasar is the extremely luminous nucleus of an ordinary galaxy. Left: The quasar as imaged by Hubble's Wide Field Planetary Camera 2. Right: The Hubble's ACS camera has coronagraph capability; a small occulting disk can be positioned to block an overpowering source of light. With the glaring 'headlight' of the quasar blocked, a surprisingly ordinary-looking galaxy disk around it pops into view. Note the hints of reddened spiral dust lanes. Does every galaxy nucleus go into hyperdrive sometime in its life?

Quasars. Blazars. Seyfert galaxies of Type 1 and Type 2. Even some professional astronomers have trouble keeping the actors on the active-galaxy playbill straight. Some of these enormous beasts spew jets of plasma at near-light speeds. Others flicker and flare with stupendous luminosities that outshine the Milky Way's energy output hundreds of times over.

But they all have the same basic makeup, Yale University astrophysicist C. Megan Urry told members of the American Astronomical Society during its Nashville meeting on Monday. In the consensus view today, every active galactic nucleus (AGN) contains a supermassive black hole feeding on gas from a tightly wound accretion disk encircling it, with a much larger, bloated torus (doughnut) of opaque material surrounding this "central engine." What the object looks like depends primarily on whether our line of sight is blocked by the opaque, puffy torus or goes through its "doughnut hole" to reach the bright center.

When we get a clear views of the central engine, we see a classical quasar. Radio galaxies and some Seyferts hide their central engines from our view with their dusty doughnuts. A rare view straight down a jet's nozzle creates the appearance of an erratically variable blazar.

Most galaxies are relatively tame ellipticals or spirals with inactive cores. A case in point is our Milky Way, whose central black hole is very dim. But like responsible adults keeping mum about their wild youth, these inactive galaxies probably all had a phase of violent nuclear activity. "Apparently every galaxy goes through an active phase," says Urry.

Her Grand Unification theory posits a deep connection not just between active galaxies, but between the formation of galaxies, their supermassive black holes, and their stars. As a sign of this connection, Urry noted that quasars were most prevalent at roughly the cosmic era when star formation peaked: some 10 billion years ago (about 3 billion years after the Big Bang; around redshift 2). Many other forms of galaxy-core activity must be going unseen at such great distances, or may be hidden by the thick dust that often obscures vigorously star-forming galaxies.

If every galaxy once had an active nucleus, every galaxy today should retain a central black hole. And indeed, in the past few years astronomers have discovered supermassive black holes (with masses of a million to several billion Suns) in scores of ordinary galaxies. Apparently every galaxy with a central bulge has one. Moreover, the mass of the hole scales up with the mass and brightness of the bulge.

Urry and others hope to gain further insights into the growth of early black holes and galaxies when the Space Infrared Telescope Facility (SIRTF) joins the Hubble Space Telescope, the Chandra X-ray Observatory, and the XMM-Newton X-ray satellite in orbit later this year. The instruments are to join forces in pursuit of star-forming galaxies and hidden active nuclei in the distant universe. With a multiwavelength attack, Urry and others plan to watch all the steps of galactic growth, and hopefully learn how and when dust doughnuts set apart the actors on the extragalactic stage.