Examining the Throat of a Black-Hole Jet 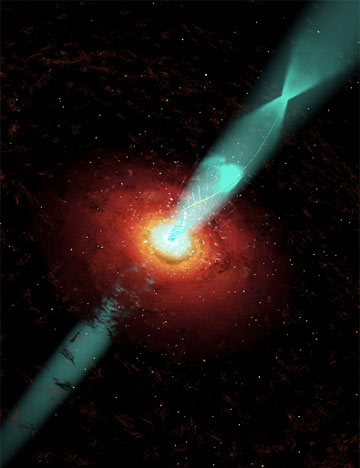 An illustration of BL Lacertae's inner workings. A bright blob in the upper jet (actually a shock front) was observed to follow a spiral path as it moved away from the central black hole (invisibly tiny black dot) along a corkscrew magnetic field (light blue lines). When the blob passed through a stationary pinch in the magnetic field (top right), a rebrightening was observed in visible light, X-rays, and gamma rays. This is a frame from a beautifully done movie showing the whole event.

Black-hole jets are among the most violent, and important, phenomena in the universe. When matter falls toward a black hole, it often forms an extremely hot "accretion disk" around the hole as it spirals in. Somehow, despite the intense gravity hauling things inward, the inner part of the accretion disk often manages to emit narrow jets of matter from its top and bottom faces. Typically, a few percent of the infalling stuff ends up getting expelled this way, powered somehow by the energy of the rest falling in.

And in extreme form they almost certainly lie at the root of gamma-ray bursts, where the massive, superdense, fast-spinning core of a supergiant star suddenly collapses into a black hole.

But how do they work? This used to be one of the biggest mysteries in astrophysics. In recent years, however, physicists have been pretty sure they've gotten it figured out. This is the scenario:

The spinning accretion disk develops an intensely powerful magnetic field. (Because the gas is very hot, electrons get stripped off atoms and can move around freely, so the gas is electrically conducting — a plasma — a lot like the copper conductors in a spinning generator.) The disk's spin wraps up the magnetic field into a tight spiral; the most intense, tightly wound part of the field breaks loose and squirts upward from the disk's inner poles; and plasma (because it's tied to magnetic fields, just like any moving conductor is) flies out along with it.

That's the theory. A lot of indirect evidence from active galactic nuclei has supported various parts of it. But now astronomers have found a really good smoking gun.

The object they studied is known as BL Lacertae, so named because it was originally mistaken for a variable star. BL Lac is a blazar: a quasar that happens to be oriented so that we look right down into its jet. Think of a truly stupendous monster opening its throat at us, saying "Aaah," and gushing high-energy vomit — as we observe from a safe distance. In this case, the distance is 950 million light-years.

Using a combination of X-ray, visible-light, and high-resolution radio observations, the group got an excellent look at a blob of plasma getting coughed up right from the bottom of the inner throat. They watched the material winding its way around a corkscrew-shaped path outward, exactly as predicted by the spiral-magnetic-field theory.

"We have gotten the clearest look yet at the innermost portion of the jet, where the stream of particles is actually accelerated, and everything we see supports the idea that twisted, coiled magnetic fields are propelling the material," says Alan Marscher of Boston University, leader of the research team. "This is a major advance in our understanding of a remarkable process that occurs throughout the universe."

For more about this, see the group's press release site, which includes a movie of their model of BL Lacertae in action. (The site also links to Marscher with guitar performing his ode to BL Lac, "Superluminal Lover".) Their paper appears in the April 24, 2008, issue of Nature.

It blows my mind that B L Lacerte a black hole is 950 million light years away.
That means if 500 million years ago B L Lacertae blew-up or burnt out, it would take another 450 million years before anyone on earth would know it was gone.