In the wake of the apparent loss of the Kepler mission, the exoplanet community salutes one of its legends while pivoting to new ground- and space-based opportunities. 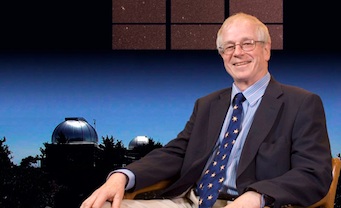 David Latham and the 1.5 meter telescope at Fred Lawrence Whipple Observatory, where Latham has observed and led efforts to build telescopes and instruments over the course of his 50-year career.

Given the untimely knockout of NASA’s exoplanet-hunting Kepler space telescope, you might expect a conference titled “Exoplanets in the Post-Kepler Era” to resemble a wake. But astronomers at the meeting, held May 20–21 at the Harvard-Smithsonian Center for Astrophysics in Cambridge, Massachusetts, described the mood as “jovial,” “festive,” and “energized” as they sat during a break on sunlit plots of grass on what felt like the first day of summer, excited conversation about weddings and new movies mingling with science results.

Originally organized to celebrate the career of Harvard-Smithsonian astronomer David Latham, the conference could hardly have had a more prescient name, offering something of a reset for the tight-knit exoplanet community. (The 117 attendees informally referred to the gathering by the shorter and more tweetable moniker #Lathamfest.) It offered both a tribute to the past — Latham’s 50 years of contributions to astrophysics and exoplanet studies — and a preview of exciting projects underway, including the just-funded Transiting Exoplanet Survey Satellite, NASA’s follow-up to Kepler.

“Sleep Is For Sissies” Following the conference's official program was one of David Latham's famous wine tastings, a weekly tradition he has hosted for years at the Harvard-Smithsonian Center for Astrophysics.

Latham is a septuagenarian with more than 100 first-author papers to his name and no sign of stopping. In his early career, he carried out unprecedentedly large surveys of stellar spectra — hundreds of thousands of observations. “Always, it was Dave’s eye that looked at the data as it came out of the telescope,” says astronomer Geoff Marcy (University of California, Berkeley). “He was tireless. Nobody else does this — ever did this, or even since.” (It’s also likely that no other professional astronomer has ever had a side career as an international endurance motorcycle racer.)

In the past 20 years, Latham’s contributions to the burgeoning field of planet-hunting helped turn Cambridge into one of the world’s capitals of exoplanet research. Speakers saluted his mentoring, his scientific doggedness (“Sleep is for sissies,” he would tell researchers who were his juniors by decades), and even his resistance to bedbugs (the benefit: saving government money at budget hotels).

But Kepler’s predicament — it’s been disabled by two failed reaction wheels, the flywheels that allow it to point accurately — lingered over the conference. Marcy, who called himself “devastated” when the news broke two weeks ago, was still in mourning. “With the likely demise of Kepler, our ability to measure the occurrence of Earth analogs is compromised,” he said. “We needed two or three more years [of data] to definitively measure it.”

When I noted that this hadn’t outwardly put a damper on the meeting’s mood, Marcy joked, “Yeah, I’m disgusted by that. So therefore, I will put on my Kepler hat—” he produced a faded baseball cap with the Kepler logo, set it on his head, and turned serious “— in honor of Kepler because the truth is, nothing is going to match Kepler in our lifetimes… But we have to move on, and people are going to move on.” 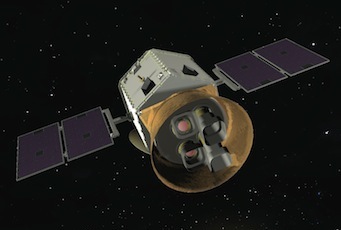 An artist's rendering of the TESS satellite. Its array of four telescopes can cover 2000 square degrees at a time, impressive coverage that prompted gasps from some of the astronomers in the audience at Ricker's presentation.

One of the ways they will do so is with the upcoming Transiting Exoplanet Survey Satellite (TESS), led by principal investigator George Ricker (Massachusetts Institute of Technology). Latham helped shepherd it through seven years of proposals and development, culminating in April when NASA selected it for a 2017 launch. Drawing on experience gained from the Kepler mission, TESS will be another space telescope searching for planets using the transit method. However, unlike Kepler, which focused its deep gaze on only one 10°-square region of sky, TESS will scan the entire sky over its two-year mission with four much smaller, wide-field scopes targeting nearer, brighter stars. It will watch at least half a million stars — including sunlike G and K dwarfs brighter than magnitude 12 and the 1,000 closest red dwarfs — compared to Kepler’s target list of 150,000 stars. 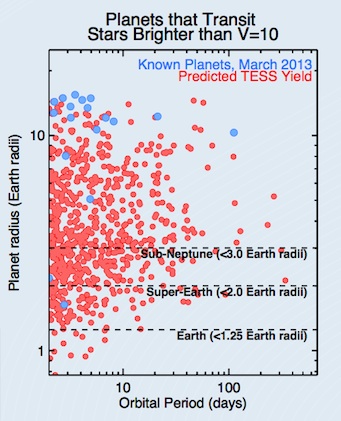 Of all the known transiting exoplanets, very few are brighter than magnitude 10 (plotted in blue). This plot shows how TESS' projected yield (red) will explode that category, enabling follow-up observations with high signal-to-noise. Click here to see Ricker's full presentation.

The two missions’ different strategies reflect efforts to address different questions. Kepler’s prime purpose was to answer, “How common are habitable Earth-like planets?” That required continuous staring at its stars to build up statistical significance for weak, infrequent transits by small planets in roughly 1-year orbits. However, most of Kepler’s targets are too faint to mine for further information. TESS will search for the most promising nearby systems with small, rocky planets, most much closer to their stars. Because those nearby stars will appear brighter, they will offer a higher signal-to-noise ratio for TESS’s more limited observing times — and for follow-up studies. Astronomers hope precision spectrographs such as HARPS in Chile and its newer, Northern Hemisphere counterpart HARPS-N will be able to measure the masses of many TESS-discovered planets, a crucial parameter that simple transits do not reveal. (Located in the Canary Islands, HARPS-N is also able to follow up on Kepler’s targets in Cygnus and Lyra.)

And what will we find in these systems ten years from now with the upcoming James Webb Space Telescope and extremely large ground-based telescopes? At the end of his own talk Latham mused, “It may be too quick, but I would love to see the day when we detect a biosignature — spectroscopic signatures of molecules which are pretty convincing evidence that there might be life. And that’s not going to be easy. But we can dream.”