It's been 25 years since astronomers discovered that the star Beta Pictoris is surrounded by a dense, dusty disk and thus represents a solar system in the making. Nowadays, finding circumstellar disks is no big deal, though probing them at infrared wavelengths continue to elicit clues to their makeup.

That's what observers led by Carey Lisse (Applied Physics Laboratory) had in mind when they trained NASA's Spitzer Space Telescope on the star HD 172555, located 95 light-years away in the southern constellation Pavo. This hot A star, only 12 million years old, had been flagged for further attention a few years ago after surveys turned up "excess infrared emission" — astronomers' secret code for "lots of dust."

Lisse's team did find dusty debris encircling the star, but not the kind they expected! Instead of a enormous pancake of rocky bits churning out embryonic planets, the star is surrounded by at least 10 billion trillion tons of micron-size dust, equivalent to the mass of an asteroid about 200 miles across. Based on strong emission peak at 9.3 microns and other spectroscopic features, most all of this microscopic dust must be in the form of amorphous silica (SiO) — in other words, glassy ash. There's plenty of sand-grain-size grit floating around too, and it's all immersed in a vast cloud of SiO gas with perhaps 100 times more mass than all the dust together. 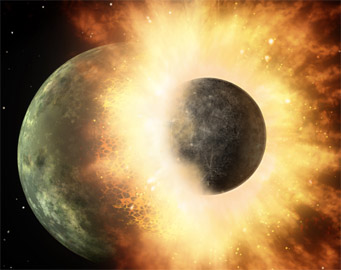 This artist's concept shows a Moon-size object slamming into a body the size of Mercury — a high-speed collision that astronomers believe occurred a few thousand years ago around a young star called HD 172555.

As the team reports in August 20th's Astrophysical Journal, the inescapable conclusion is that two planets within this budding solar system have collided violently — and recently, perhaps within the past 1,000 years. The smash-up took place at a location from HD 172555 comparable to Jupiter's distance from the Sun. Other possible explanations for the silica-rich dust, such as powerful shock waves in a gas-rich protoplanetary disk or massive stellar flares, don't fit the Spitzer data.

Lisse speculates that two rocky bodies, at least the size of the Moon and Mercury, slammed into each other at more than 6 miles (10 km) per second. This hypervelocity impact destroyed the smaller body, turning its rock into white-hot SiO vapor that is still condensing today. NASA's Deep Impact mission observed a similar set of collisional by-products when its 800-pound (370-kg) copper cannonball slammed into Comet 9P/Tempel four years ago.

This When Worlds Collide scenario closely follows theorists' script for the Moon's formation: a wayward Mars-size planetoid struck Earth a glancing blow, white-hot debris jetted into the surrounding space, and the solid matter that condensed afterward rapidly collected into the big ball we see today. Lisse notes (in a NASA press release) that collisions like that around HD 172555 are short-lived events, adding, "We're lucky to have witnessed one not long after it happened."

If you've got the bandwidth for a 25-megabyte download, check out this nifty animation depicting the impact.

It's fascinating the way they put the different pieces of information together to find this scenario. And that animation is really something. Download it if you possibly can.

It's fascinating the way they put the different pieces of information together to find this scenario. And that animation is really something. Download it if you possibly can.

Kelly: could we please have some healthy journalistic (not to mention scientific) skepticism here? "Inescapable conclusion?" You guys are a LOT better than that!

http://adsabs.harvard.edu/abs/2009arXiv0906.2536L
The arXiv e-print,(Abstract Abundant Circumstellar Silica Dust and SiO Gas Created by a Giant Hypervelocity Collision in the ~12 Myr HD172555 System) is interesting reading. If I understand the modeling, the dust grains are of a particular size and absorb a significant amount of host star radiation, the dust ring may last <= 1,000 years. If this is an accurate upper limit lifetime, we have a very recent origin suggesting possible collision models to explain. I think it is good to be skeptical though. When I consider that of the 373 exoplanets documented, 146 are orbiting closer to their host stars than Mercury does to our Sun, I remember well when astronomy taught that only solid, rocky planets formed close to their stars because of the heating. Clearly planetary formation models can be flawed and so possibly this explanation here too.