Here's an irony for you: This week, during a meeting of the American Astronomical Society, researchers described an intriguing black hole dubbed H1743-322 that burped up two massive blobs of superhot matter in 2009. Key to the finding were observations from NASA's Rossi X-ray Timing Explorer — which ground controllers had shut down for good just days before the meeting, on January 5th, after 16 years of operation. 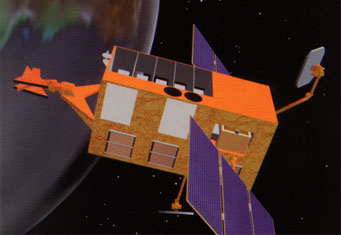 With a mass of 3½ tons, NASA's Rossi X-ray Timing Explorer circles Earth in an orbit 375 miles (600 km) high. It ceased operation in early 2012 after 16 years of observations.

As project scientist Tod Strohmayer explains in NASA's announcement, "The spacecraft and its instruments had been showing their age." Partly for this reason — but largely because the space agency had too little funding to operate all its spacecraft — NASA managers followed the recommendation of an external review panel and opted to terminate the mission's funding.

Launched in December 1995 as the X-ray Timing Explorer, the 1½-ton craft was renamed a few months later to honor Bruno Rossi (1905-93), a pioneer in the fledgling field of X-ray astronomy during the 1960s.

RXTE was one of those workhorse spacecraft that you rarely hear about. It was tasked with recording very short variations in the output of cosmic X-ray sources. RXTE's three instruments allowed high-energy specialists to monitor even relatively weak events that varied as rapidly as a few microseconds. The spacecraft kept an X-ray eye on large swaths of sky over a wide range of energies, from 2,000 to 250,000 electron volts (a typical dental X-ray is around 60,000 eV).

These capabilities might not sound very exciting — it's not the kind of mission for which NASA's public-relations team spends big bucks to create slick artist's concepts and dramatic videos. But they were crucial to understanding the detailed workings of white dwarfs, neutron stars, and black holes — and the spacecraft could be slewed quickly to observe an outburst as it happened. 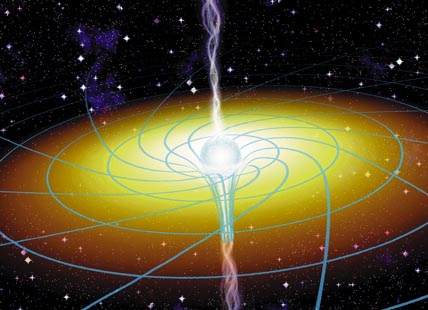 An artist's concept of frame dragging shows a black hole's rotation twisting the fabric of space and time. As material crowds in through the accretion disk, some gases are squeezed outward to become superluminal jets.

The first big news coming from the RXTE mission came in 1997, when astronomers used RXTE's timings to show that the gravitational attraction of spinning black holes is strong enough to drag along the very fabric of space and time in its vicinity. This relativistic "frame dragging" had been predicted by Albert Einstein in 1918 but never before observed.

In the late 1990s, NASA scientist Chryssa Kouveliotou and others used RXTE to confirm the existence of magnetars, rapidly spinning neutron stars with magnetic fields more than 100 trillion times stronger that the Sun's. Those observations garnered Kouveliotou, along with Robert Duncan and Christopher Thompson, who predicted the existence of magnetars, the 2003 Bruno Rossi Prize for high-energy astronomy.

A frequent target for this timing machine was Eta Carinae, the southern sky's famously supermassive star that flared to prominence in the mid-1800s, getting so bright that it rivaled Sirius. RXTE observations offered the first hints that Eta Carinae might actually be two closely paired giant stars, suspicions that were confirmed a few years later by another space observatory, the Far-ultraviolet Spectroscpic Explorer.

In fact, RXTE observations have been used in more than 2,000 refereed articles over the years — not bad for a craft that cost only a few million dollars per year to operate. A fuller list of the mission's scientific highlights is here.

So now what? RXTE offered unique capabilities that aren't matched by other current spacecraft, such as NASA's Swift or Japan's Suzaku. One partial replacement will be India's Astrosat, to be launched later this year, which should provide limited monitoring of transient X-ray sources.

The only reason for shutting it down cited in this article is "The spacecraft and its instruments had been showing their age." What kind of a reason is that, especially since there doesn't seem to be anything else with all of its capabilities? Was it becoming unreliable? Was it running out of some sort of coolant, fuel, or other energy source? Were they concerned that they might lose the ability to control it in the near future for some reason?

Mike, the real reason was money, or actually the lack thereof. I've added more detail in the story — in response to your comment. thanks for that!

How much of the operating cost were salaries? If the hoice between total shutdown & keeping Rossi's Explorer operating is the cost of manpower, then why not offer time shares to the amateur astronomers or let them volunteer their time? Better that then a total shutdown of a important piece of hardware.
If the Rossi's Explorer must be shutdown then what happens to it? Does it just become another piece of floating space junk or will it be brought back to earth in a controlled manner. (Not simply moved into an earthbound terminal orbit to crash somewhere on the planet.) Captured & returned safely.
39.13 -77.16 +5:00

Quote: "In fact, RXTE observations have been used in more than 2,000 refereed articles over the years — not bad for a craft that cost only a few million dollars per year to operate."

Quote: "So now what?" Yes well, how many ways can one say: stupid..? I've seen enough of our science shut down to say it is way too stupid to be just 'stupid'. It is very much a full blown effort to shut down America's science - period.

And the way this article was written only enforces the concept. Flip and vulgar.