Sky & Telescope announces the first-ever globe of Mercury, pieced together in full from the latest images taken by the Messenger spacecraft. It's now available on our online store.

My colleagues and I are always excited about the great stories we cover in the magazine and on our website about professional and amateur astronomy. But this week we have a special thrill. Working with the scientists on NASA’s Messenger team, we have produced the first complete globe of the planet Mercury, and it’s now available for sale! 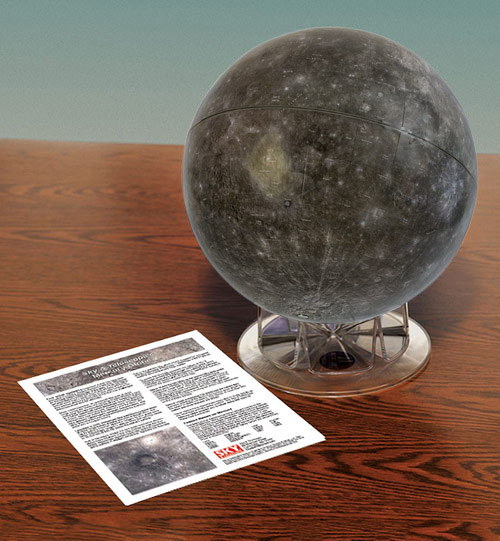 Until the 1970s, Mercury was almost completely shrouded in mystery because of its small size and proximity to the Sun. Even the largest telescopes showed only the subtlest of hints of surface features. That changed in 1974-75, when NASA’s Mariner 10 spacecraft made three flybys of the innermost planet, revealing a battered, heavily cratered landscape that was reminiscent of our Moon. Still, the three flybys managed to image only about 45% of the planet’s surface.

Finally, we now have a complete map of the surface, thanks to NASA’s Messenger spacecraft. Messenger (short for Mercury Surface, Space Environment, Geochemistry, and Ranging) was launched in 2004 and flew by Mercury three times before entering a highly elongated orbit in March 2011. Over the next two years, Messenger took thousands of pictures of Mercury’s surface from different distances and under different illumination conditions. By mid-2013, the Messenger science team had enough imaging data to produce a global map of Mercury’s surface.

Messenger scientists Brett Denevi, Nancy Chabot, and Louise Prockter provided Sky & Telescope with the underlying base map used to create the globe, which is 12 inches across (the same as our other planet globes). S&T illustration director Gregg Dinderman, working closely with senior contributing editor Kelly Beatty, painstakingly placed nearly 400 labels to indicate the names of craters, mountains, valleys, and other features. 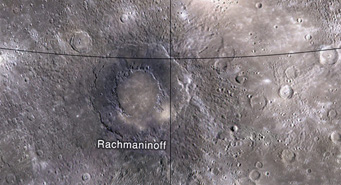 The globe comes with labels for more than 350 craters and other features, including craters named after famous artists, musicians, painters, and authors.

Being a music buff, I particularly enjoy the IAU-approved names of Mercurian craters, since they honor some of my favorite composers and improvisers, including Bach, Beethoven, and Monk (Thelonious). Other features are named after great writers, artists, and various contributors to the humanities.

At first glance, the Mercury globe looks somewhat similar to the Moon globe. Both are grayish and heavily cratered worlds. But on closer inspection, it becomes obvious that the two worlds have significant differences.

“Huge volcanic plains cover areas such as the Caloris Basin, but their composition is very different from the lunar equivalent,” says Denevi. “And even though much of Mercury is cratered like the lunar highlands, it appears this terrain is substantially younger than the highlands, has a different composition, and may have formed in a completely different manner. Our understanding of the planet is evolving every day.”

To help differentiate the two globes and to enhance the beauty of the Mercury globe, we included a slight color cast. These slightly different shadings represent compositional differences over Mercury’s surface as revealed by Messenger’s multispectral wide-angle camera.

Besides the Messenger scientists, we thank Replogle for putting the globes together. The globe is now available at Shop at Sky for $99.95, and it comes with a fact sheet that gives more details about Messenger and how we produced the globe. Check it out and become one of the first people to own a globe of our solar system’s mysterious innermost planet!