The Dark Energy Camera is one of four new cameras that started taking gigantic images of big chunks of the night sky this past month. 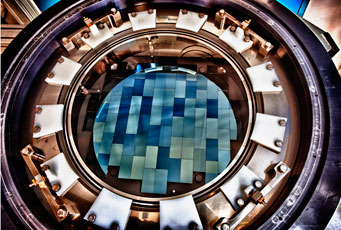 Four of the newest — and largest — eyes in astronomy opened to the night sky this past month: the Dark Energy Camera on the 4-meter Blanco telescope on Cerro Tololo, Chile, the Hyper Suprime-Cam on the 8.2-meter Subaru telescope on Mauna Kea, the One Degree Imager on the 3.5-meter WIYN telescope at Kitt Peak in Arizona, and the Large Monolithic Imager on the newly minted Discovery Channel Telescope at Lowell Observatory, also in Arizona. The mammoth images they produce from their different corners of the world may help answer some of the biggest unanswered questions in astronomy.

The first three cameras are new wide-field imagers, among the largest digital cameras ever produced. A typical astronomical instrument might house a handful of CCDs for imaging the sky. These behemoths go well beyond that. The Dark Energy Camera and One Degree Imager each have just over 60 CCDs, and the Hyper Suprime-Cam checks in with 116 CCDs. Housing all of these CCDs is no small feat. These detectors are huge — Hyper Suprime-Cam leads the way, standing 3 meters (9 feet) high and weighing 3 tons.

The Dark Energy Camera took this picture of the Fornax galaxy cluster, which lies 60 million light-years from Earth. The barred spiral galaxy toward the bottom is named NGC 1365.

Each of these three cameras contains hundreds of millions of pixels, making the images some of the largest ever taken. For example, each image downloaded from the One Degree Imager will be two gigabytes in size. Combining CCDs in an array means that each camera can image wide fields in a single exposure, making them ideal instruments for surveying large chunks of the sky.

All of these detectors were designed to carry out sensitive surveys in order to address some of astronomy's biggest unanswered questions: What does the universe look like on large scales? What drives its accelerating expansion? What’s the source and nature of dark energy and dark matter? 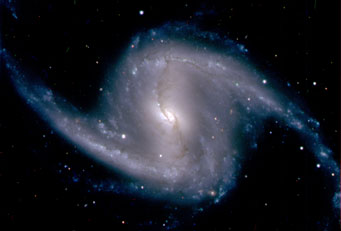 Zooming in on the barred spiral galaxy NGC 1365 reveals a surprising amount of detail.

Astronomers will use the cameras to answer these questions in different ways. For example, the Dark Energy Camera will survey about an eighth of the sky over five years, starting this December. It will measure the large-scale structure of the universe, detect far-away supernovae, record the effects of sound waves that rippled across the early universe, and detect weak gravitational lensing — dark matter’s distorting effect on the shapes of faraway galaxies. Each of these measurements will help astronomers constrain the properties of dark matter and dark energy.

While three of the cameras house large arrays of CCDs, that's not the only way to take a large image. Another instrument, the Large Monolithic Imager (LMI), recently debuted at Lowell Observatory in Arizona. The LMI is one of the largest single CCDs used in astronomy, with 36-megapixels covering a field of view of nearly 13 arcminutes by 13 arcminutes. The single chip is designed to be sensitive to light across the optical spectrum, and will enable the study of faint, low-surface brightness objects. The LMI is the primary imager on the Discovery Channel Telescope.

These imagers pave the way for the next generation of astronomical cameras and surveys. The most ambitious survey planned for the next decade is the Large Synoptic Survey Telescope (LSST). This 8-meter telescope will be built in Chile, and using a camera the size of a small car, will image the entire sky every three days for 10 years. LSST will image hundreds of millions of galaxies and billions of stars, taking the most complete picture of our universe ever captured. It’s scheduled to begin full operations within the next decade. Personally, as part of the LSST science collaboration, I can't wait for this project to get started. But in the meantime, these cameras and the images they produce will definitely keep me busy.

Guest blogger John Bochanski is a postdoctoral scholar at Haverford College, where he uses large surveys to study the smallest stars in the Milky Way galaxy. Originally from New Jersey, John's work has taken him all over the globe, including to Chile, where he helped build and install the FIRE spectrograph on the Magellan telescopes.

Billions and billions of pixels...

Seriously cool camera. One day I hope to be able to Upgrade my Original DSI and OSS II planetary imager.

The "first light" image obtained with the Large Monolithic Imager (LMI) on Lowell Observatory's 4.3-m Discovery Channel Telescope (DCT) can be found at http://www2.lowell.edu/Research/n891.jpg
The image was obtained by Phil Massey, Ted Dunham, and Mike Sweaton, and turned into a nice color composite by Kathryn Neugent. The galaxy shown in NGC 891, an edge-on spiral galaxy about 10 Mpc away in the constellation of Andromeda. The exposure times were fairly short, and unguided (10x1 minute in B, 5x1minute in V, and 6x1 minute in R) but give a hint as to the power of the camera and telescope. A press release can be found at http://www.lowell.edu/news/2012/09/lowells-nsf-funded-large-monolithic-imager-sees-first-light-on-the-discovery-channel-telescope/

Congrats all around to the crews that built and the astronomers who are operating these four new telescopic systems. @Phillip Massey, Thanks for sharing your first light image. Readers of S&T keenly anticipate seeing and reading about your new telescope’s discoveries. And, speaking of discoveries, does the Discovery Channel plan on airing any shows soon about their new telescope? I’d love to watch a show about it’s construction.

With all the images and data sets recorded, it could make for an incredible 3D motion video of the entire universe from any axial perspective.

Very interesting overview. In the first paragraph there seems to be a small coversion detail error. 3 Meters are almost exactly 10 feet, not nine feet.

While that is certainly a nice first light image by the LMI team on the Discovery Channel Telescope, the press release associated with it is quite misleading. It's just not true that the LMI will give them more scientific thru-put than a mosaic of chips UNLESS you're talking about a mosaic of chips that covers exactly the same FOV on the sky! the 13x13 arc-minute FOV of LMI is actually quite modest by modern survey standards and a fraction of that of the other survey instruments mentioned (all of which have greater scientific thru-put). I'm sure the Lowell astronomers would have loved to have had a mosaic of 4 such chips, but they just could not afford it. As it is, I hope they can find the funds to keep the DCT operating, as they (as are many observatories) have quite a funding crunch at the moment.