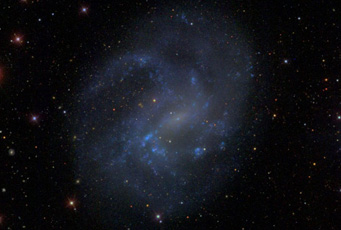 NGC 4395 is the poster child for dwarf galaxies hosting supermassive black hole. The leviathan at its center has the mass of 300,000 Suns.

Supermassive black holes, the ubiquitous heavyweights lurking at the core of almost every large galaxy, have a mysterious past. It’s easy to make a black hole a few times the mass of the Sun — a massive star loses its battle against gravity and collapses under its own weight. But no star weighs the same as millions or even billions of Suns, so how do these monsters form?

To add to the mystery, until recently astronomers thought dwarf galaxies, the runts of the galactic litter, were too puny to host black holes. Searches for black holes in nearby dwarfs, such as the Small and Large Magellanic Clouds, have come up empty. But a few freak dwarfs, such as NGC 4395 pictured to the right, were found with black holes a few hundred thousand times the mass of the Sun.

Now Amy Reines (NRAO) announced at the 223rd American Astronomical Society meeting that they’ve expanded that sample slightly — from a few weirdos to 151 dwarf galaxies with signatures of black hole activity. And these black holes are keys to the past.

To grow monsters, you’ve got to start big. And there are a few guesses on how to do that. One camp holds that supermassive black holes are the remnants of the first generation of stars. Unpolluted by heavier elements, these stars were able to grow to tremendous sizes, with masses up to hundreds of times of the Sun. These stars could then collapse into “seed” black holes that were already of considerable heft.

Even better, says another camp, would be to collapse a black hole directly out of a gas cloud. That’s tricky to do even in theory, but with the right conditions, it might be possible to make black holes thousands of times the mass of the Sun. That’s an even better place to start from if you want to grow a black hole quickly. Since black holes a billion times the mass of the Sun exist just 1 billion years after the Big Bang, this theory is a tempting alternative despite its difficulties. 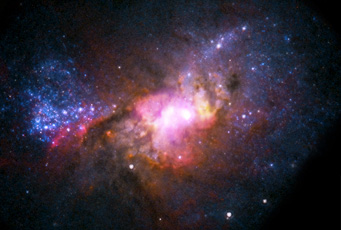 But how do you test which scenario, if any, is right? Look around in the local, present-day universe and you’ll see lots of large galaxies with fully grown black holes. Try peering into the distant past and you might see the biggest and brightest black holes feeding on gas, but you won’t see the smaller seeds — they’re simply too faint even for future telescopes. But dwarf galaxies are windows into the past, says Reines, because they haven’t evolved much since the beginning of the universe.

“Today’s dwarf galaxies retain the memory of the seeding scenario,” Reines explains. If black holes formed from the remnants of the once-common, very large first stars, then every dwarf galaxy should have a massive black hole. The direct-collapse model is trickier though, so seeding black holes this way would probably leave most dwarf galaxies without a black hole to call their own.

Reines and her colleagues pulled 25,000 galaxies from the Sloan Digital Sky Survey and searched the visible-light spectrum of each for telltale signs of a massive, feeding black hole. They found those signals in 151 dwarfs — not even 1%.

So are black holes in dwarf galaxies rare? Not so fast. Reines’s team could only detect feeding black holes. So dormant ones — and most of them would be dormant most of the time — would go undetected. Furthermore, a dwarf galaxy with lots of star formation would have drowned out any black hole signal.

“This was just a first step,” Reines says. So far, there’s not enough data to lean one way or the other in the seeding scenarios, but there will be.

Soon Reines will be back at the telescope, this time collecting data using the Very Large Array and the Chandra X-ray Observatory. Radio waves and X-rays reveal what visible light can’t. Since a black hole emits at these wavelengths even when it’s not chowing down on a huge meal, the expanded survey should reveal dormant (or at least less active) black holes, even in star-forming galaxies. Stay tuned…

Discrete Scale Relativity predicts that no matter how far astrophysicists look back in time, right up to the Big Bang and before that too, galaxies and their central black holes will be observed.

So far this is exactly what has been found.

Some would say that conventional cosmological knowledge precludes this prediction. They forget that this summary dismissal is based on pure speculation.

The presence of the CMB indicates a very large amount of proton and electron recombination, but that does not preclude co-existing galaxies.

It seems apparent that the main thing black holes like to eat is other black holes. When stars and matter in typical states approach BHs it gets ripped to shreds and pulled into an accretion disc, and then much of the material gets shot out the jets and never falls into the hole. I wonder how many dwarf galaxies and their a-little-less-than-super super massed black holes have been accreted by the Milk Way over the last 13 bys or so?

Anthropomorphizing here, but the main thing black holes like to eat must be smaller black holes. Normal states of matter that approaches a BH gets spaghettified by tidal forces, ionized by friction in the accretion disc, and then much of it never accretes into the hole but gets shot out the jets. Since so much normal matter gets recycled back out into space instead of falling in, most BH growth must be by the consumption of objects that can’t be ripped apart, such as other BHs and maybe neutron stars. I wonder; how many dwarf galaxy not-quite-super super massive black holes have been swallowed whole by the Milky Way’s SMBH?