A new study published in the Jan. 26 issue of Nature highlights a rising theme in the symphony of astrophysics research: When you can’t go to the stars, bring the stars to you.

In this case, an international team of researchers studied where galaxies get their magnetic fields by zapping a minuscule rod with lasers to make a proxy of the environment in a forming galaxy. Their result — the creation of tiny “seed” fields by a well-known theoretical effect — supports current ideas of how large-scale galactic fields could arise and adds to previous arguments against more peculiar explanations. 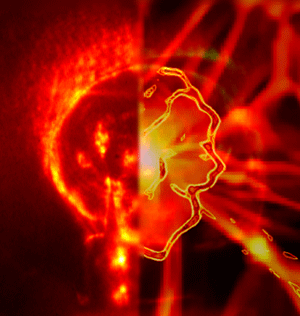 Reality jibes with simulations in this composite image of a shock wave. On the left is a laser-produced shock wave; on right, a simulation of a collapsing shock wave from before galaxies started forming. Brighter colors show the shock region of higher density or temperature.

Vast magnetic fields exist in all galaxy types and even on cluster and supercluster scales. It’s thought that turbulence and rotation in forming galaxies may amplify already-present weak fields, creating large-scale ones, explains Lawrence Widrow (Queen’s University, Ontario), who was not involved with the new study. Where these seed fields come from remains an open question. They could be primordial, arising from fancy physics cartwheels in the early universe. But such fields are “fairly exotic,” Widrow says, and require a lot of assumptions about conditions at the cosmic dawn. A better option would be astrophysical causes — fields expelled by the first stars when they died explosively, or by madly gobbling black holes in galactic cores. Or, created by the Biermann battery process.

In a nutshell, a Biermann battery is the spontaneous creation of a magnetic field when a curved shock wave goes through hot, ionized gas. It’s a well-known theoretical effect, and astronomers have suggested it before as a solution to the cosmic magnetic field question. To test the idea, researchers set up a 500-micrometer-wide carbon rod in a chamber of helium gas and vaporized the rod with laser beams. The supersonic expansion of the vaporized carbon drove a shock in the gas, which, because the shock wasn’t perfectly spherical, created a magnetic field, explains coauthor Francesco Miniati (ETH Zurich, Switzerland). Such fields could easily arise in the collapsing gas that forms galaxies, where over several hundred million years gas dynamics would augment the fields enough to affect the galaxy’s evolution, Miniati and his colleagues conclude. How exactly those effects would manifest is still mysterious, he says. But because magnetic fields affect the motion of interstellar gas, they may regulate star formation in molecular clouds and confine superspeedy particles called cosmic rays.

The result matches what’s expected theoretically from shocks during the collapse of matter into protostars and galaxies, but it’s the first experiment to unequivocally produce the effect in a lab, says Dongsu Ryu (Chungnam National University, South Korea), who has written several review papers with Widrow on the origin of the universe’s magnetic fields.

Miniati acknowledges that “it is a bold extrapolation” to draw conclusions from an experiment roughly a trillionth of a trillionth the size involved in intergalactic fields. But due to the physics involved in this particular case he’s confident that such scaling is possible.

The Biermann battery could work in any collapsing or accreting material, meaning it could provide the seed for stars’ fields, too. Where it — and the other theories — can’t reach is into gigantic cosmic voids, where astronomers have also found hints of weak magnetic fields. But a 2010 paper by Miniati and Tony Bell (Oxford University) suggested that a charge imbalance caused by cosmic rays could explain those fields, providing another astrophysical explanation that removes the need for exotic primordial fields.

Good job of explaining, in your "nutshell" paragraph, what was shaping up to be a complicated topic. 🙂

According to the equipartition of energy principle, from Physics 101, if you mix gravity with plasmas, magnetic fields happen. So why is the appearance of magnetic fields in galaxies a mystery?