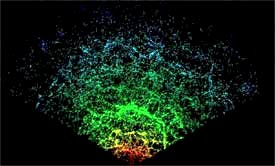 This Sloan Digital Sky Survey map of the universe is 2 billion light-years deep. Each point represents a galaxy with a measured redshift. Maps like this have revealed the signature of enormous sound waves rippling through the early universe.

Maps provide windows into the past. For instance, towns and villages are distributed differently in Europe than they are in North America, because the two continents experienced very different settlement histories. Likewise, three-dimensional maps of the distribution of galaxies contain valuable information about the early history of the universe and the way its large-scale structure came into being. The latest results from two comprehensive galaxy surveys independently confirm the important role of dark matter and dark energy in the evolution of the cosmos. "The concordant picture of the universe is hanging together amazingly well," says Martin J. Rees (Cambridge University, England).

Both the Two-Degree Field Galaxy Redshift Survey (2dF) and the Sloan Digital Sky Survey have produced three-dimensional maps of how galaxies are distributed across large volumes of space. A thorough statistical analysis shows something remarkable: galaxy groups display a very slight preference for being 500 million light-years apart. In other words, if you check every possible pairing among all individual galaxies in the surveys, distances of around 500 million light-years show up 1 percent more often than you would expect. "It's a very subtle signature," says Sloan team member Daniel J. Eisenstein (University of Arizona).

According to the astronomers, who presented their results Tuesday at the American Astronomical Society conference in San Diego, the observed patterns are the frozen remains of sound waves. The waves propagated through the primordial soup of dense electrified gas and trapped energetic photons in the first few hundred thousand years after the Big Bang. These waves swept up more material in some regions than in others. Traveling at 57 percent of light speed, the waves reached a characteristic size of a few hundred thousand light-years by the time the hot soup became electrically neutral and the photons were finally able to stream freely through space at a cosmic age of 380,000 years. Since then, the expansion of the universe has blown up the subtle overdensities like fingerprints on a stretched piece of rubber.

2dF spokesperson Richard S. Ellis (Caltech) says the patterns found in the galaxy surveys provide precise information on the makeup of the universe: 77 percent dark energy (the nature of which is still an unsolved mystery), 19 percent nonbaryonic dark matter (likely consisting of unidentified particles), and 4 percent baryonic matter (atoms and other types of familiar matter). The figures have a precision of about 10 percent and are in excellent agreement with conclusions drawn from observations of the cosmic microwave background. In fact, by combining the galaxy survey results with data from NASA's Wilkinson Microwave Anisotropy Probe, says Eisenstein, astronomers find that the universe is very flat: space doesn't show any large-scale curvature, to an unprecedented precision of 1 percent.

"It's very good we have two independent groups" arriving at the same answers, says Martin Rees. Also, the new results may provide a "robust and innovative new method" to study the expansion history of the universe, says Eisenstein. Now that the characteristic size of the frozen sound waves has been measured in the local universe, Sloan-like surveys of very distant galaxies could reveal how cosmic expansion has decelerated and accelerated in the past. But this will require new sensitive spectrographs on bigger telescopes. "Nothing along these lines has been funded yet," notes Eisenstein. 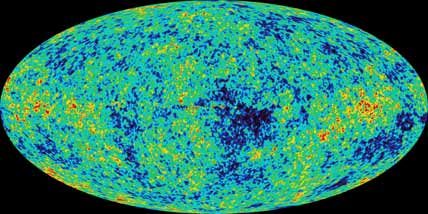 Thousands of slight temperature ripples, at scales large and small, mottle the microwave background radiation covering the sky. This all-sky map shows first-year results from the WMAP mission. These slight irregularities in the early universe, seen 380,000 years after the Big Bang, evolved to produce the galaxy clustering we see today.