Like people, galaxies have the urge to merge. Unlike people, what draws them together is gravity. The universe is chock-full of pairs or groups of galaxies in various stages of interaction and coalescence. Usually a large galaxy gobbles up one or more small ones. Now a team of astronomers using a battery of ground- and space-based telescopes has stumbled upon the most massive galaxy smashup ever seen. 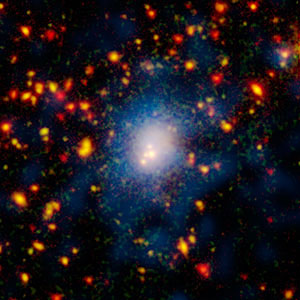 The four white blobs at the center of this image are distant galaxies merging into a single behemoth. The haze around them is light from billions of stars tossed out during the messy encounter. Other galaxies and stars appear yellow, orange, and red, while hot intracluster gas is tinted blue. This is a composite of infrared, visible, and X-ray data from NASA's Spitzer Space Telescope, the ground-based WIYN Telescope, and NASA's Chandra X-ray Observatory, colored red, green, and blue, respectively.

Some 4 billion light-years away, the monster merger is happening in the core of a galaxy cluster known only as CL0958+4702 (for its coordinates in the constellation Ursa Major). The cluster called attention to itself by pouring out strong X-ray emissions.

Kenneth Rines (Harvard-Smithsonian Center for Astrophysics) and his colleagues zeroed in on it with NASA's Chandra X-ray Observatory, the infrared Spitzer Space Telescope, and the WIYN Telescope at the National Optical Astronomy Observatory in Arizona. In the cluster's core, they found a tangle of four galaxies as big or bigger than our own Milky Way, surrounded by a haze of billions of stars ejected from them by the melee. "What we have here is like four sand trucks smashing together, flinging sand everywhere," says Rines.

The multispectral observations suggest that most of the system's glow comes from starlight rather than fluorescing gas. So, unlike most other galaxy mergers, this one isn't producing a new generation of stars. About half the old stars buzzing around the four star cities in the heart of the cluster will probably fall back in. "When this merger is complete," says Rines, "this will be one of the biggest galaxies in the universe."

More images and information are available in a press release from the Spitzer Science Center at Caltech. The study by Rines's team appears in the August 10th issue of Astrophysical Journal Letters.