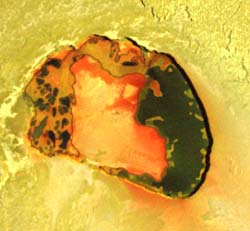 NASA's Galileo spacecraft took this close up view of Jupiter's volcanically active moon Io on October 31, 2000. The seemingly smoldering crater, called Tupan Patera, is about 75 kilometers across and is surrounded by cliffs 900 meters high. Courtesy

Just after 9 a.m. Eastern Standard Time yesterday, the Galileo spacecraft made its closest and last flyby of the volcano-riddled moon Io. During this seventh and final passage, the probe glided just 100 kilometers (60 miles) from Io's surface. Unfortunately, less than a half-hour before closest approach, Galileo's onboard computer reset, causing the probe to cease taking images and other data and enter a "safe mode."

"We're not totally surprised," says Eilene Theilig, Galileo's project manager at the Jet Propulsion Laboratory (JPL). "Galileo has already outlived expectations and we knew that it might encounter additional difficulties from the high-radiation environment on this flyby." Although battered by the intense radiation of Jupiter's magnetic field, Galileo has continued to operate well beyond its design limits. Nevetheless, it has become more prone to radiation-induced glitches such as Thursday's.

Despite Galileo's ruggedness, its remaining days are now numbered. Because its steering fuel is nearly gone, mission planners chose to make one last orbit of Jupiter before plunging the probe headlong into the planet's crushing atmosphere in September 2003. The decision was made to insure that the spacecraft could not collide with — and contaminate — Europa, which many scientists believe has a subsurface ocean that could potentially harbor life.

The JPL flight team is working to bring Galileo back online so it can resume taking data during its final swing by Jupiter. And with luck, there will be one more imaging session: In November Galileo will pass by Amalthea, a 125-kilometer-long, irregular moon within Io's orbit.