Planetary exploration at a crossroads. On one hand, right now the pace of discovery is head-spinningly rapid. Robotic explorers are orbiting Venus, Mars, Saturn, and the Moon, with another days away from arriving at Mercury. Spacecraft heading to solar-system destinations near and far are queued for launch later this year. It's a great time to be a planetary scientist. 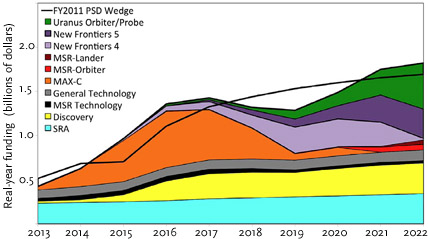 The black line shows the rosy budget projection for NASA's solar-system explorations, and colored wedges indicate the funds needed for specific projects. However, in the fiscal year 2012 budget submitted to Congress by the Obama administration, interplanetary missions take a steep cut.

But there's writing on the wall, and it isn't very positive. While the Obama administration has requested $1.54 billion for NASA's solar-system activity in fiscal 2012 budget, up 11% from fiscal 2011, it'll start dropping in the years thereafter. By 2016 NASA's planet-chasers will working with only $1.25 billion.

Against this backdrop, today the National Research Council's Space Studies Board (part of the U.S. National Academy of Sciences) released an exhaustive, 400-page report that lays out a strategy for planetary exploration from 2013 to 2022. The NRC released similar assessments for astrophysics and heliophysics last year.

Although technically these "decadal surveys" assess the entire scope of a space-science discipline — NSF-funded activities, new directions for research, and which new technologies are worth developing — their real raison d'être is to decide which space missions should be A-listed for funding. And NASA counts on the panels to represent the consensus of each particular scientific community — once the rankings are made, that's pretty much it.

You have to give credit to Steven Squyres and his 15-person steering committee: since getting their marching orders two years ago, they've collectively digested 199 position papers representing the views of nearly 1,700 individuals. For purposes of manageability, the task force carved up the solar system into five domains: Mars; other terrestrial worlds (Mercury, Venus, and the Moon); giant planets; satellites; and primitive bodies (comets and asteroids). 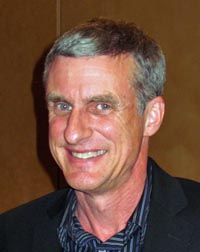 "First and foremost, we're trying to take the pulse of the community," Squyres explains. But at the same time it's all got to fit within NASA's projected budget, and to ensure that the candidates' costs were estimated both by their proponents and by an independent aerospace contractor. "The good news is that these costs are probably realistic," he notes. "The bad news is that you're going to see some sticker shock."

NASA flies three classes of interplanetary craft: low-cost Discovery missions; moderate-cost New Frontiers missions; and uber-costly Flagship missions. Although it didn't weigh in on Discovery candidates, the panel recommends continuing this highly productive program at its current level ($500 million per year). Also reaffirmed is the decision to build the Mars Trace Gas Orbiter in partnership with the European Space Agency.

A packed ballroom of more than 1,000 planetary scientists were on hand for the debut of Vision and Voyages, the latest assessment of future NASA planetary-science missions.

For a suitable venue to unveil the report, titled Vision and Voyages for Planetary Science in the Decade 2013-2022, the Space Science Board chose the Lunar & Planetary Science Conference, whose 1,500 attendees have much to gain — or lose — from the panel's picks for Flagship and New Frontiers consideration. And here they are:

The only two serious contenders were the same ones offered up during the previous go-round returning samples of Mars to Earth, and sending a dedicated orbiter to Jupiter's enigmatic moon Europa. Last time, Europa got top billing — this time, it's Mars.

The envisioned sample-return effort would actually entail three missions: one or two rovers to collect and cache samples, a rocket that boosts the samples into Martian orbit, and a ferry dispatched to Mars to return the samples to Earth. It's such an expensive undertaking to complete that only the first of these elements — the Mars Astrobiology Explorer-Cacher (MAX-C) — is being considered. But the panel admonishes NASA and ESA, its partner, that the price tag for MAX-C needs to come down to $2.5 billion to be viable … and that likely will require leaving one rover behind. 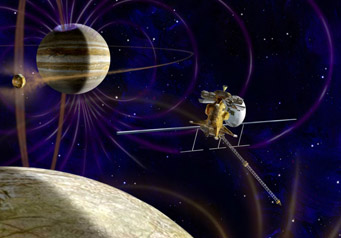 With an estimated price tag of $4.7 billion, the proposed Jupiter Europa Orbiter is ranked highly important by planetary scientists but probably too expensive for NASA to undertake within the next decade.

"Some scientists in Houston voiced concern at the choice of a "Mars Sample Return or Bust" strategy — not only because there's no Plan B for long-term exploration of the Red Planet but also because the Jupiter Europa Orbiter has been under study for years and is considered technologically ready to go. There's no question JEO would produce amazing science, Squyres says, but its projected cost of $4.7 billion is "a scary big number" — the kind of budget-busting expense that would crowd out many smaller efforts.

Farther down on the wish list are Flagship missions to Uranus, Enceladus, and Venus. But, realistically, the crescendo for spending cuts in Washington likely means that NASA's budget will be hamstrung for years to come. That reality, combined with the ballooning cost overruns for the James Webb Space Telescope, likely means that none of these big-ticket undertakings are in the agency's foreseeable future.

"We'll have a challenge to execute a Flagship mission within the existing budget," admits James Green, who heads NASA's solar-system-exploration efforts. "Until a different budget is passed, those are my marching orders."

So space-exploration junkies wanting a quicker science fix should instead keep tabs on the Discovery pipeline and get to know the proposed midsize missions, which have price tags at or below $1 billion (with launch rockets priced separately). Two approved spacecraft in this class are New Horizons, now en route to Pluto, and Juno, to be launched toward Jupiter this August. A third should be selected for funding within a few months.

Squyres' panel would extend the New Frontiers series with a fourth mission selected from one of these recommendations:

Then the following two candidates would be added in prior to the selection of the fifth New Frontiers mission:

Now that the recommendations are out, Squyres and his steering committee plan to take them on the road to build that all-important community consensus at a series of town-hall presentations. He then hopes droves of planetary scientists will contact their representatives in Congress — not only to draw attention to the great missions waiting to be flown, but also to try to keep NASA's solar-system budget from taking the nosedive projected for the years ahead.

Click here to watch a replay of tonight's presentations by Squyres and Green.

The major problem with the Flagship missions is keeping them withing budget, which apparently is an impossibility. The James Webb Space Telescope is a prime example of why you don't put all of your eggs into one basket. While it's nice to dream big, reality is you get more bang for your buck with less expensive missions. I'd rather see five New Frontier missions instead of one Flagship mission. You get more coverage of more targets, and hence more science in return for your (our) money.

It's discouraging to think about the immediate future of space exploration while the current crop of tea party Republicans controls the US House of Representatives. Their agenda is to cut taxes on the wealthy and cut government spending on all fronts, except the military, homeland security, and prisons. I suppose a libertarian would argue that once the super-wealthy are relieved of the burden of paying taxes they will be able to fund private space exploration, and that the wonders of the free market will result in great efficiencies and unimagined wonders of discovery. But realistically, the current frontier of private space flight is suborbital and low-earth orbit, using 60-year old technology. If humanity is going to continue exploring the solar system, we need to accept that we're all in this together, we need to work together through national and international organizations, and we need to pay for it.

Has there ever been a serious attempt to standardize probe construction? Say a common Frame, power system, computer, maneuvering system, antenna, etc; and the only thing that changes is the instrumentation? Perhaps if we asked teams to stick to a standard, and only deviate if truly necessary, we may save some money from economies of scale.

Tom, yes there were. Back in the 1980s, a previous decadal-survey panel proposed two series of spacecraft based on common designs: Planetary Observers and Mariner Mark II. The latter was to be used for a Comet Rendezvous and Asteroid Flyby (CRAF) mission as well as for Cassini. The former was canceled, and the latter was scaled back before launch.