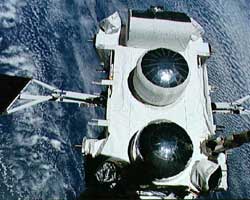 Data collected by the Compton Gamma Ray Observatory (which reentered the Earth's atmosphere in June 2000) was used to determine that gamma-ray bursts occur closer than astronomers originally thought.

Gamma-ray bursts, or GRBs — fleeting flashes of high-energy photons that appear anywhere on the sky — emanate from galaxies halfway across the visible universe and their origination predates the solar system. At least that's the picture astronomers deduced from the mysterious explosions' stupendously distant redshifts. So more than a few eyebrows went up in a Washington, D.C., lecture hall Monday when Jay Norris (NASA/Goddard Space Flight Center) told an audience of astrophysicists that many GRBs may have actually popped off in our intergalactic neighborhood: the pancake-shaped Local Supercluster of galaxies, which extends some 300 million light-years from the Milky Way.

"There's this myth that gamma-ray bursts are chaotic and unpredictable, said Norris, "but that's not true." In fact GRBs might even be used as "standard candles" with which to measure cosmic distances. Astronomers monitoring GRBs have found they emit their highest-energy gamma rays first, with somewhat "cooler" gamma rays following milliseconds or seconds later. In one study of nine GRBs with known redshifts, the time delay appeared to be correlated with the GRB's luminosity as seen from Earth: the longer a GRB takes to "cool," the less luminous it is.

Using data from the recently destroyed Compton Gamma Ray Observatory, Norris identified roughly 100 GRBs that cooled especially slowly, taking a second or more. Intriguingly, he finds that these presumably feeble GRBs are clustered along the plane of the Local Supercluster. Since GRBs as a whole are distributed randomly about the sky without any preferred direction, this suggests that Norris's sample originated "locally." It also bolsters the notion that the "lag-luminosity" relationship can provide at least a crude indication of a GRB's distance.

"I wouldn't consider it fact at this point," says GRB expert Robert Nemiroff (Michigan Technological University) of Norris's yet-unpublished analysis, "but it's a very interesting conjecture." The Swift spacecraft, slated for a September 2003 launch, should settle the issue, says Nemiroff, by obtaining redshifts for dozens if not hundreds of gamma-ray bursts.