September 8, 2004, was supposed to be a day of triumph for solar-system exploration. That's when a sealed capsule from NASA's Genesis spacecraft returned to Earth with samples of the solar wind carefully collected in space. 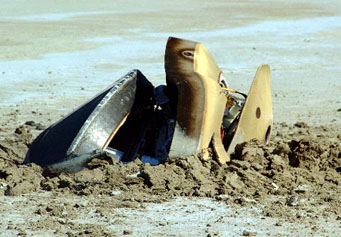 But when a malfunction caused the capsule to plummet from the sky onto Utah's high desert, it initially seemed that both the craft and any hope of salvaging its results were shattered.

Luckily, many of the delicate collectors inside survived the plunge. In particular, a nest of four at the heart of a special concentrator made it. Seven months later, scientists felt confident that the mission's top objective — measuring the relative abundance of oxygen's three isotopes — would still be achieved.

It's been a long road to recovery. The collector plates had to be cleaned of dirt and other contaminants. Then, last December, a portion of one plate was sent to California for analysis by a one-of-a-kind machine, dubbed MegaSIMS,which extracted and measured the solar wind's fingerprint. If nothing else, scientists had to ensure that the abundant oxygen in Earth's atmosphere didn't swamp the delicate balance of trapped gases.

Virtually all oxygen atoms have an atomic weight of 16. A tiny fraction of them have a weight of 18, and even fewer are 17. The ratios of these have emerged as very sensitive indicators of where something formed in the solar system.

For example, the ratios for Earth and its Moon are identical, arguing that their formation was somehow intimately coupled. But the ratios for Mars (as derived from Martian meteorites) are somewhat different. Those in the most primitive meteorites — and particularly in tiny nuggets called calcium-aluminum inclusions (CAIs), the most ancient solar-system matter known — are very different.

The Sun represented a critical missing piece of this isotopic puzzle. Cosmochemists assume that whatever atoms populate the solar wind must be representative of what's in the Sun itself and therefore a sample of the raw mix from which the planets formed. So would the Sun's oxygen ratios match those of Earth or of the ancient meteorites? The very framework of planetary formation hung in the balance. It's a fundamental question that Genesis was designed to answer.

Finally, the results are in. At the 39th annual Lunar and Planetary Science Conference in Houston, Texas, Kevin McKeegan (University of California, Los Angeles) announced that the Sun has proportionately far more oxygen-16, relative to oxygen-17 and -18, than is present in terrestrial seawater. There's a serious mismatch. Instead, the solar ratios follow the same trend seen in primitive meteorites.

Suddenly, Earth is the odd planet out. "We had little idea what the Sun's ratios should be," McKeegan told me after his presentation. Now, he says, there's "no plausible model" to make Earth with the oxygen ratios it exhibits. "It's always been a challenge to supply Earth with the water it has. And now we're wondering how it got the rocks it has."

That view was echoed by Robert Clayton, a University of Chicago cosmochemist who's recognized as the grand master of oxygen-isotope research. "The CAIs were thought to be the anomaly and we were normal," Clayton explained. "But this result has turned that idea upside down."

With cosmochemists suddenly caught between a rock and a hot place, they will likely turn to the outer solar system for more clues to the isotopic puzzle. It's possible that the European Space Agency's Rosetta spacecraft will determine the 17O/18O ratio of its target, Comet 67P/Churyumov-Gerasimenko, when it arrives in May 2014.

Until then, the Genesis team can take great satisfaction not just in having salvaged their mission, but in underscoring once again how little we know about how our strange and wonderful home planet came to exist.

The solar wind escapes with such ferocity that no fractionation of isotopes is possible. It's a very different situation than that, say, at the top of Venus's atmosphere, where atoms run into one another and the lightest ones are most likely to reach escape velocity — Kelly Beatty

Is there any proof that the distribution of oxygen in the solar wind today is the same as it was when the earth was formed ?
Charlie Mueller

Kelly, your answer to my prior comment still would assume that all isotopes are distributed evenly within the Sun. I don't think we can make that assumption; the fact that Genesis found more O-16 in the solar wind than we thought it should have may be the evidence to suggest that more of the Sun's O-17 and O-18 is deep in the Sun's interior and can't get into the solar wind. It would be the simplest explanation of Genesis' findings. It's hard to believe that the Sun is completely and perfectly homogeneous.

As you wrote, "Suddenly, Earth is the odd planet out....'It's always been a challenge to supply Earth with the water it has. And now we're wondering how it got the rocks it has'....

"Until then, the Genesis team can take great satisfaction not just in having salvaged their mission, but in underscoring once again how little we know about how our strange and wonderful home planet came to exist."

Great coverage of some stunning findings. But as I was reading just this morning, "In the beginning God created the heaven and the earth." What a thought. You know, the name of the spacecraft actually was "Genesis"(!)

Earth's oxygen is bracketed by that observed in various classes of meteorites.

Here are the oxygen isotope data in the Earth and in various classes of meteorites, as reported in 1976.