Can we drag you away from all the excitement on Mars from this past week? (Click on that link later!) Good, because NASA's latest high-energy observatory is scheduled to be lofted into orbit next week. I hope you got your suggestions for a name submitted in time. 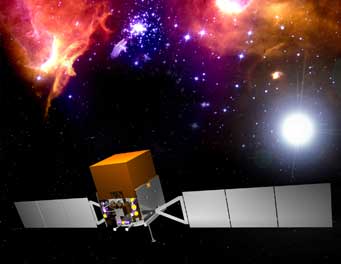 The space agency announced yesterday that the first opportunity to launch the Gamma-ray Large Area Space Telescope (GLAST) will be Thursday, June 5th, between 11:45 a.m. to 1:40 p.m. Eastern Daylight Time. That's two days later than previous projections, but even if it's delayed further, the time of the launch window will remain the same. So I'm sure I'll be spending my lunchtime in front of NASA TV to watch it go.

For more about the GLAST mission, read the article in the June issue of Sky & Telescope or check out the project website.

And if you missed it, GLAST researchers participated in a discussion answering questions from SkyandTelescope.com readers. Check out the online transcript.

Update: On June 2nd, NASA announced that the launch date has been moved back a couple more days, to Saturday, June 7th.

Update 2: Now the launch date is Wednesday, June 11th at the earliest.