Scientists sneaked a peek into the Sun’s interior, but what they saw contradicts the assumptions made by models predicting solar activity. 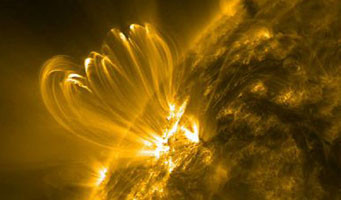 The 11-year cycle of the Sun's magnetic activity is thought to be governed by the meridional flow, which takes surface plasma (and its associated magnetic field) from the equator to the poles.

Like a toddler, the Sun can be changeable. Once you learn to read the signs, tantrums — or in the Sun’s case, radiation- and particle-spewing fits — can become easier to predict. But much as parents look forward to the day their children can verbalize their thoughts, solar scientists look forward to forecasting activity based on what the Sun tells them about its own inner churnings.

A new study published in The Astrophysical Journal Letters brings that goal one step closer — and yet, another, possibly bigger step farther away. Junwei Zhao (Stanford University) and colleagues used the Solar Dynamics Observatory to watch the gas in the Sun’s photosphere bulge and retract in response to sound waves passing through the interior. By timing the arrival of waves sloshing against the surface, the team indirectly glimpsed gas flows deep inside the Sun.

And what the astronomers saw flies in the face of current models that attempt to describe the Sun’s behavior. 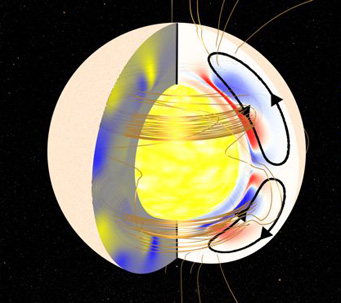 The black lines in this simulation trace the path theorists used to think the meridional flow took as it circulated inside the Sun. New observations from Zhao and his colleagues contradict this picture.

The Sun’s magnetic field is like a bar magnet, generated as charged particles inside the Sun circulate like water boiling inside a spherical pot. The bar-magnetic field brings relative calm, but as ever, calm precedes the storm. Because the Sun’s equator rotates faster than its poles, the rotation twists and disrupts the magnetic field, creating sunspots, magnetic loops of charged gas, and massive (and sometimes Earth-directed) ejections of charged particles and radiation. It takes another current, the meridional flow, to carry tangled magnetic flux from the equator to the poles and reset the field. The 11-year cycle that ensues governs solar activity.

Models of how the Sun creates its magnetic field have assumed the meridional flow follows a single circulation cell, traveling along the Sun’s surface from the equator to the poles before sinking deep inside for the ride back. The return flow was supposed to be so deep and so slow, it would take roughly 11 years to cycle back to the equator, explaining the length of the solar cycle.

For decades, solar-cycle forecasters had used signals from the Sun’s surface, rather than a true physics-based understanding of the Sun’s inner machinations. But when the first physics-based models predicted activity for Cycle 24, they failed miserably. They predicted a cycle 50% stronger than the preceding one; instead, Cycle 24 turned out to be the weakest solar cycle in 100 years. 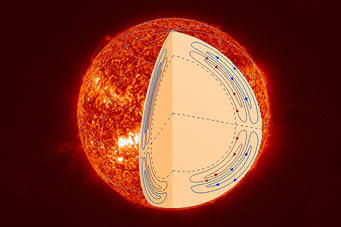 The observations reported by Zhao’s team might explain why the physics-based models failed: the team measured not just one, but two circulation cells for the meridional flow.

The first return flow from the pole back to the equator is relatively shallow, 62,000 km (39,000 miles) below the Sun’s surface — half as deep as models had assumed. But the flow turns poleward again at 125,000 km down, indicating a second cell stacked beneath the first. The authors note that even more cells could be hidden below these.

David Hathaway (Marshall Space Flight Center), who has done extensive research on the meridional flow and its role in predicting the solar cycle, says the results are “catastrophic” for current theory. “It indicates the need for revolutionary changes in our dynamo models for the sunspot cycle.”

Thank you for a most interesting article.
The fact that existing models of the sun´s magnetic field may need to be changed does not amaze me one bit.
Your sentence "The Sun’s magnetic field is like a bar magnet, -- " illustrates the difficulty in desribing magnetic fields let alone understanding them.
I fear much of physics has progressed little in this respect from the days of iron filings and bar magnets which Farday and Maxwell found so intriguing.
The shape of magnetic fields produced by bar magnets are not representative of magnetic fields in general.Yet how many schools world wide go beyond them. How many have ever experimented with ceramic block magnets and ferromagnetic discs in the form of real magnetic coins. I have not yet come across anyone, physicist or scientists in general, who has not been amazed by what has recently been achieved. see
"Investigating Magnetism", by Willson, Riley and Harris, available for download with associated images at http://www.magicpenny.org.

How many? From my own experience with physics curricula, I would estimate that 99% or more of college/university physics programs worldwide go beyond the "bar magnet" representation of magnetic fields, and about 80% or more of secondary (high school) physics classes go beyond the bar magnet. So the short answer is "nearly ALL". Of course, the general structure of the magnetic field of a bar magnet, or better yet, a closed loop of current, is an important starting point: a zero-th order approximation to nearly every magnetic field in Nature. The issue for solar magnetic field modelling has far less to do with any imprecise knowledge of magnetic fields themselves and much more to do with our very high ignorance of the convective and other large-scale motions within the Sun --EXACTLY as explained in the article.

This is a very interesting report of an important finding. I do public outreach, including showing people the Sun through a small hydrogen-alpha telescope. I try to explain why we see prominences, sunspots, etc., in terms of the Sun's magnetic field lines. I will try to remember to tell folks that there's a lot we don't understand, and astronomers are learning more about the Sun through new instruments like SDO.

Would have been nice if the article had said a little more about the source of the acoustics how "sound waves" are observed when in a vacuum.

No, scientists didn't 'sneak' anything.

SDO and even more so its predecessor SOHO study the surface waves on the Sun. These are acoustic waves in the solar plasma. The waves can be detected by looking at the Doppler shift of the light emitted from the glowing plasma.

Is this report an indication that the Sun's core and interior is not as dense or hot as stellar evolution requires? The current solar interior model is developed based upon radiometric ages of meteorites and not hydrogen burn rates. This is what determines the Sun's current plot on the H-R diagram.

Very interesting article but the "elderly" comment doesn't belong in a science blog. Go to a more appropriate place than the S&T blog to voice your material.