The globular cluster Palomar 5 with its 5°-long tidal tails.

A team of astronomers using data from the Sloan Digital Sky Survey today displayed the first view of a globular star cluster being torn apart by the tidal force of the Milky Way.

At the 200th meeting of the American Astronomical Society in Albuquerque, New Mexico, Eva Grebel and Michael Odenkirchen (Max Planck Institute for Astronomy, Germany) described the first galactic-halo star cluster seen undergoing this disruptive process. Tidal stripping of stars from globular clusters has long been expected. But the new finding suggests that our galaxy started out surrounded by many more globular clusters than the roughly 160 known today, and that many or most have already been pulled apart and their stars strewn throughout the galactic halo.

The globular is Palomar 5, visible in amateur telescopes at 12th magnitude in Serpens. It lies very far (some 60,000 light-years) above the plane of the Milky Way. Its newly discovered tidal tails span a huge 10° of sky in total; each tail is more than 1,000 light-years long.

The shape of the tails, say Grebel and Odenkirchen, provides a unique tracer of the cluster's orbital motion. Simulations show that the trailing tail should lie just outside the cluster's orbit (the yellow arrow in the picture above) and the leading tail just inside it. "We have the footprints of the orbital motion of the cluster on the sky," says Odenkirchen. "For the first time, we can detect the orbit with high accuracy. . . much more accurately than by any other method." 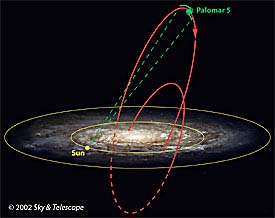 Palomar 5's orbit around the Milky Way, as deduced from its tidal tails.

Analysis of such tails could provide a unique way to map the distribution of matter, including dark matter, in the galactic halo — if the astronomers find enough additional examples in the SDSS data, as they expect they will.

The team found the tails by filtering the massive SDSS star database to remove unrelated stars in the foreground and background. The astronomers analyzed the color/luminosity relationship of stars still in the cluster's depleted core, then subtracted out all field stars not having these characteristics.

The tails, it turned out, contain about 1.3 times as much mass as remains in Palomar 5 itself. Knots within them suggest that the tidal disruption has been episodic, presumably coinciding with the cluster's past crossings through the galactic plane.

The cluster's orbital motion shows that it will next pass through the galaxy's plane in about 100 million years. But this time it will cross through the inner disk, a denser region than it met in previous crossings. At that point, says Odenkirchen, "it will be destroyed completely."

Ultimately, Grebel says, the same method should reveal not only other globulars undergoing disruption, but even the remnant debris streams from clusters that have been destroyed completely.