NASA's Galaxy Evolution Explorer has been observing the ultraviolet universe for a decade. But after having its mission extended three times, the spacecraft has finally been turned off. 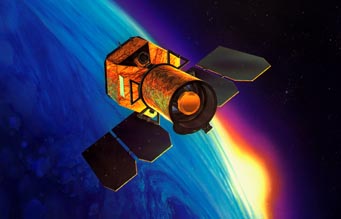 Now the end time has come for NASA's Galaxy Evolution Explorer. Launched in April 2003, GALEX had its initial 29-month-long mission extended three times — including the first-ever handoff of a NASA spacecraft's operation and funding to a private organization (Caltech) last year. The spacecraft had suffered the loss of one detector, but otherwise it seemed capable of many more years of operation. Principal investigator Christopher Martin and his team hoped to complete an all-sky ultraviolet survey.

But yesterday flight controllers switched off GALEX for good. "We ran out of funds and exhausted most of the obvious other sources," Martin explains. "While heroic efforts might have bought us another few months, we decided that after 10 years we should end the mission on a high note and move on to other projects."

According to a Caltech announcement, the spacecraft will likely remain in its near-circular polar orbit for another 65 years before reentering Earth's atmosphere.

The venerable space observatory carries 20-inch (0.5-m) f/6 Ritchey-Chrétien telescope with 1.2°-wide field of view. GALEX gave astronomers views of the ultraviolet universe at wavelengths from 135 to 280 nm. Its observations were especially useful in showing how galaxies make the transition from youngsters bristling with star formation to mature, less-active systems. One surprise was the realization that some old galaxies are encircled by rings of new stars. 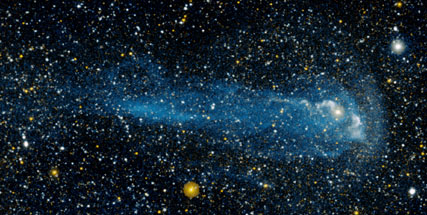 In this two-color closeup by GALEX, far ultraviolet is shown as blue and nearer ultraviolet as red. Mira appears to be emitting two swirly streamers of stuff, which spread out to form a comet-like head and, eventually, tail. Note the detached bow shock of far-ultraviolet gas just in front of the head, to the right.

Astronomers found other uses for its capabilities too, such as searching for shock waves from supernova explosions and for frenetic activity around black holes. GALEX discovered that the well-known variable star Mira is trailed by an enormous, comet-like tail. Its Caltech-led team has assembled and posted a slide show of popular GALEX images.

A fourth eulogy for a space observatory might be needed soon. Engineers are still working to revitalize the Kepler spacecraft, which last month suffered the loss of a reaction-control wheel — critical for the precision pointing needed to do its job. But the prospects for recovery aren't good.

Will the Webb Telescope Be Canceled?