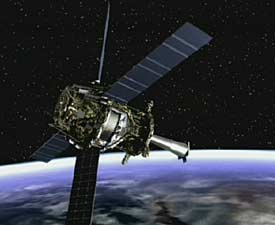 Gravity Probe B should measure the warp of space due to the geodetic effect as 6.6144 arcseconds of drift in the gyroscropes' spin direction, and only 0.0409 arcsecond due to the frame-dragging effect.

It took nearly 90 years of theory, 40 years of engineering, and 10 years of lobbying to keep it alive — but yesterday scientists at Stanford University and NASA finally saw Gravity Probe B (GP-B) take flight to carry out the most accurate test yet of Einstein's general theory of relativity.

The satellite was placed into a circular orbit passing 400 miles above Earth's poles. It will measure two effects on the fabric of space-time predicted by general relativity. One is "frame-dragging," the twisting of space caused by our rotating planet. This effect has never been directly detected, though astronomers think they have found signs of it near spinning black holes. The other is the "geodetic effect" of space-time curvature due to the presence of mass, which is well known but will be measured more accurately that ever before.

Using perfectly spherical gyroscopes aligned with the utmost precision to a distant guide star, GP-B will be able to detect any directional drift caused by the warping of near-Earth space as small as a ten-thousandth of an arcsecond. This possibility has been achieved by overcoming a host of challenges to provide a static space-time reference system with near-perfect isolation from all outside forces.

In 1916 Einstein formulated his general theory of relativity, in which a four-dimensional fabric of space and time is shaped by the mass and energy within it. As a result, an object in free fall travels through space along a geodesic, a curve (rather than a straight line) that represents the shortest possible path between any two points. In most situations the geodetic effect is extremely small and proportional to the local masses — but so far, still enough to explain gravity with perfect precision. Measured by gravitational lensing, Einstein’s prediction of the geodetic effect has been found accurate to 1 part in 40,000. GP-B should improve that to between 1 part in 100,000 and 1 part in 250,000.

However, the most anticipated observation that GP-B will attempt is of frame-dragging. According to general relativity, the rotation of massive objects twists the surrounding space-time. This effect is of particular interest to theoreticians like Kip Thorne of Caltech. "GP-B will act as a landmark here in front of us for when we go out into the external universe to interpret our astrophysical and cosmological observations," he says. The instruments aboard GP-B should measure this much smaller effect of frame-dragging to an accuracy of 1 part in 100.

As Einstein’s mathematical model of gravitation approaches its 90th anniversary, Anne Kinney, director of NASA's Astronomy/Physics Division, boasts of GP-B’s own long record. "This project was discussed only a few years after the formation of NASA; it has been funded as a research project since 1963 and as a flight mission since 1994." 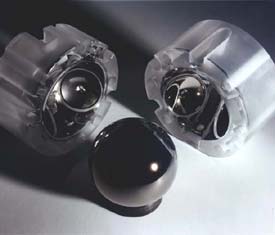 The gyroscopes are coated in niobium, selected for its unique property of electric stability. The rotating spheres a magnetic field with a significant direction of current that remains steady for years, without disturbance. This magnetic field direction is known as the London moment, a small difference field proportional to the spin speed, which is exactly aligned with the spin axis, pointing to the guide star.

Rex Geveden, GP-B program manager at NASA's Marshall Space Flight Center, explains some of the technical hurdles the satellite had to overcome. "The spacecraft flies in a drag-free orbit, which means that the gyroscope rotors are literally in free fall about the Earth and the spacecraft flies around the gyroscopes." The craft retains its course by detecting any slight deviations of the surrounding shell from the free-falling gyroscopes and using thrusters to expel minuscule amounts of helium gas to bring the craft back into line.

Four spherical gyroscopes of solid quartz are used, two for each effect. Each is 1.5 inches in diameter and a million times more accurate that the best navigation gyroscopes. These gyroscopes are the most perfectly spherical objects within light-years; only tightly bound neutron stars rival them. The gyroscopes are electrically suspended and set spinning in a vacuum chamber 9 feet long. The chamber will provide a pressure density less than 10 times the surrounding space and cooled to 1.8°K above absolute zero (– 455°F) while submerged in superfluid liquid helium for the entire 18-month mission. The chamber is fused to a 5.6-inch Cassegrain telescope trained on a specially selected guide star, HR8703 (IM Pegasi), which will provide an orientation standard accurate to 0.1 milliarcsecond of accuracy.

A thin coating of niobium metal on the quartz spheres sets up a slight magnetic field shielded from the outside by a layer of superconducting lead foil enclosing the vacuum chamber. The spheres' magnetic field provides a rotation axis measured by a SQUID (Superconducting QUantum Interterference Device) that can detect about 0.1 milliarcsec of drift.

"If general relativity fails, such a failure would have tremendous consequences for fundamental physics," says Thorne. "What we are going after in GP-B, in terms of the search for any deviation of frame dragging from general relativity’s prediction, is a search for whether or not the foundations for general relativity are there. Is gravity really a metric theory, or not? That is, in some sense, what’s being probed."