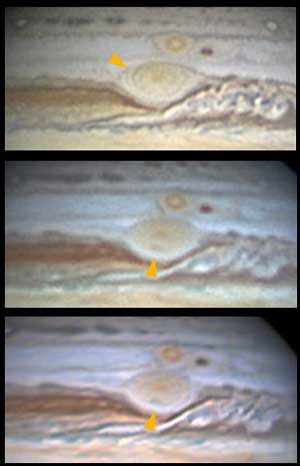 Three shots by amateur astronomers taken on September 7th (top) and 8th (bottom), in which a small blemish (marked by the orange triangle) circles the Great Red Spot. Using these and other amateur images, Rogers was able to clock the storm's rotation period.

Jupiter’s Great Red Spot is as constant as the North Star. In other words, it only looks constant — its constancy depends on how long we watch it. In the late 1800s the behemoth storm looked more like a Great Red Sausage, stretching about 40,000 kilometers (25,000 miles) wide and only about 12,000 km tall. When the Voyager spacecraft dropped by in 1979, the storm was only 25,000 km wide but basically the same height.

Last week John Rogers (British Astronomical Association) confirmed that the storm is still tightening its waistline. Rogers clocked the maelstrom’s rotation period by using images taken by an international network of amateur astronomers. These images followed a dark streak as it whipped three times around the spot, providing a marker to gauge how fast the storm clouds whirligig. The circulating blemish made the trek in 4.0 days, shorter than the 4.5 days Rogers measured in 2006 using the same method.

The GRS’s outer radius hasn’t shrunk much since 2006 (it’s a bit less than 20,000 km wide now), but Rogers found that the drop in rotation period is happening at about the same rate as the drop in the radius of maximum wind speed, as previously measured from spacecraft and Hubble Space Telescope images.

“It is amusing to note that the GRS now has exactly the same circulation period and the same north-south diameter as the atmosphere of Venus,” he says.

What’s neat about the new result is that it’s all done with amateur observations. These measurements were once almost impossible from Earth-based telescopes, says Rogers. Now, amateur astronomers can confirm work done with Hubble. (Cue awestruck music.) 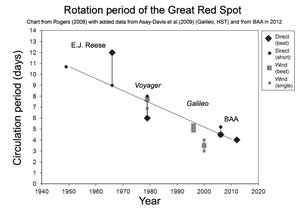 A comparison of amateur, Hubble, and spacecraft measurements of the Great Red Spot's rotation period. The gradual decline is consistent with the storm's shrinking size. Click for a larger view.

Rogers also estimated a max wind speed of 135 m/s (300 mph), up from about 112 m/s in 2006. That’s consistent with the range of 118-132 m/s measured directly by Hubble in 2006, and the vortex’s rotation speed has generally fluctuated within this range without any overall trend. Still, Glenn Orton (Jet Propulsion Laboratory) suggests that the speed uptick between 2006 and 2012 might be an overall change related to the vortex’s shrinkage. It could be that, somewhat like an ice skater spinning faster as she pulls in her arms, the storm’s rotation speed is rising as it shrinks.

Whatever may be afoot with the wind speeds, the GRS is definitely downsizing its girth. Orton says that by 2050 or so, the storm might be better known as the Great Red Circle. (Goodness knows if it will have returned to being red at that point. Right now, it’s more like a pasty salmon.)

So if the Great Red Spot is shrinking so much, could it one day disappear? Unlikely, but it is possible, Orton says. If so, the storm might already be training its replacement: Oval BA (a.k.a. “Red Spot, Jr.”) has been a happy sidekick for several decades, with no sign of wearing out its welcome.

Indeed. This is a very interesting collaboration among amateur astronomers in the UK, USA, Philippines, Japan, Portugal, France, and Greece. It's impressive to think about everything that makes this work possible: improvements in telescopes and imaging technology and the ability to plan and share results directly over the internet. Very cool.