Threatened by NSF cuts, the Green Bank Telescope signed a deal with West Virginia University to receive $1 million over the next two years. But the radio antenna will need more than that to survive long-term. 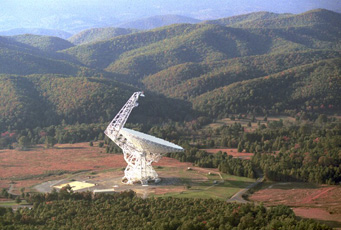 The 100-meter-wide dish of the Green Bank Telescope observes the radio sky 6,500 hours a year at meter and millimeter wavelengths.

About a year ago, a National Science Foundation committee proposed cutting funding to several telescopes across the U.S. to pave the way for future projects. Though some of the cuts were expected in this era of budget pressure, others were surprises. Putting on the chopping block the just-13-year-old Robert C. Byrd Green Bank Telescope, the world’s largest fully steerable, single-dish radio antenna, qualified as a surprise.

“No other telescope on Earth is competitive with the Green Bank Telescope in any measurable parameter,” Thomas Bania (Boston University) said at the time. Astronomers at astro blogs, such as AstroBetter and Dynamics of Cats, chimed in with dismay at the cuts. A local organization even started a petition to “Save the GBT”.

Now West Virginia University is stepping up to the plate. In return for $1 million in funding over the next two years, the university will receive a proportional amount of observing time. That deal gives WVU’s physics and astronomy department a boost in reputation, and it also gives four WVU professors observing time that their teams will dedicate to a wide range of projects, from active star-forming regions and weird classes of pulsars to gas reservoirs around galaxies (including our own) that could one day form stars. 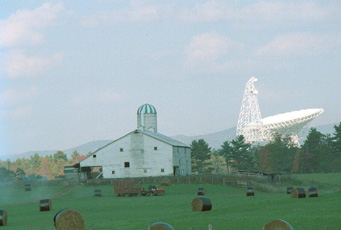 The Green Bank Telescope is nestled in the Allegheny Mountains of West Virginia. The 13,000 square miles surrounding the telescope make up the U.S. Radio Quiet Zone, where use of wi-fi, cell phones, and most radio frequencies are banned.

“This is a fantastic commitment from our university,” says Duncan Lorimer (WVU). But he adds that it’s not enough to keep the observatory going. The NSF is still funding the majority of telescope operations, which amount to roughly $10 million per year, according to last year’s NSF Portfolio Review Committee. And according to the committee’s recommendations, that funding should disappear in another four years.

“We all want to see the GBT continue to operate, and it would be great if the federal budget were in good enough shape to support the telescope in two years,” says D. J. Pisano (WVU). “I am enough of a realist to realize that is unlikely.”

The current deal might help create a new funding model for the telescope. But Pisano remains cautious. “For the time being I think we will just try to make the most of the time we have.”

I spent an internship at the observatory and found a advanced facility like no other. With the University actively participating more discoveries will be made plus the training of future astronomers will be implemented.

*sigh* $10M is a lot of bake sales. I hope more Universities pony up, but science this big really requires public funding.

If only the late Senator Robert Byrd of West Virginia could rise on the floor of the Senate and marshal his considerable rhetorical powers in support of continued federal funding for his namesake radio telescope. I imagine he might warn his good friends on both sides of the aisle of the fate of civilizations that neglect their intellectual inheritance, with apposite quotes from classical Greek and Roman authors. It is truly sad and ironic that this telescope, named after one of the great champions of government's role in promoting national development, is being sold piecemeal like a timeshare condominium.