The European Southern Observatory has approved the construction of European Extremely Large Telescope (E-ELT), whose 128-foot (39-m) primary mirror could be feasting on starlight about a decade from now.

Long, long ago, when backyard stargazers dreamed of owning a 6-inch reflector, I vividly remember making pilgrimages to Palomar Mountain in California to see the world's largest telescope. In the visitor's center was a massive concrete slab, bigger around than our family room, to represent the 200-inch (5-m) primary mirror of the famous Hale Telescope. 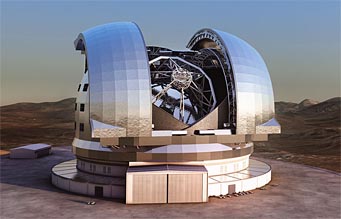 An artist's impression of the European Extremely Large Telescope (E-ELT) atop Cerro Armazones in Chile's Atacama Desert. With a primary mirror 129 feet (39.3 m) across, it will be the world's largest optical-infrared telescope when completed about 2022.

So my mind veritably boggles at the notion of a telescope so huge that its secondary mirror is nearly as big. Yet astronomers are now a step closer to that reality, because this week the European Southern Observatory's governing council approved construction of the European Extremely Large Telescope, or E-ELT. It's the no-nonsense moniker for an instrument destined to become the world's largest optical instrument, with a primary mirror 129 feet (39.3 m) across. That's 60% more aperture than the Giant Magellan Telescope now under construction and a third bigger than the proposed (but iffy) Thirty Meter Telescope.

As announced by ESO on June 11th, six of ESO's 14 member states have approved the project outright and four others have given provisional approval. The remaining four are expected to join the majority soon.

As enormous as the E-ELT will be, it's been scaled down from the original proposal, which called for a 42-m primary, to save money. An even larger Overwhelmingly Large Telescope, with a 100-m primary, never gained much traction with ESO's cost-conscious council. Even so, officials have budgeted nearly $1.4 billion for the decade-long E-ELT project. Operations could begin as early as 2022. 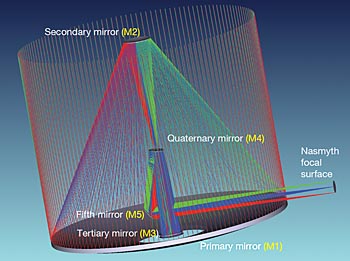 The European Extremely Large Telescope will need five mirrors to deliver starlight to instruments placed at its Nasmyth focus. The deformable mirror M4 will be crucial to E-ELT's adaptive-optics system.

For now, the effort will concentrate on improving the road to the summit of Cerro Armazones in the Chilean Andes, where a modest observatory already exists, and constructing the adaptive mirror that's crucial to removing the blurring effects of Earth's atmosphere. All told, the E-ELT will bounce starlight off five different reflective surfaces before it reaches one of the eight instruments that might be clustered at its Nasmyth focus.

And what might one do with a telescope this big? ESO astronomers hope exploit its visible-light and infrared prowess to find and scrutinize Earth-like planets in the "habitable zones" of other stars, measure characteristics of the first stars and galaxies to form after the Big Bang, and to probe the nature of dark matter and dark energy.

You can get more background at the E-ELT website or dig a little deeper by downloading this 24-page executive summary of a much longer project blueprint.

Wow. Can you imagine the competition for time on this baby? I’m sure the pros are lining up already. Solution: build another one in the northern hemisphere. I applaud the Chileans and the Europeans for this truly colossal undertaking. In spite of their economic problems, EU nations are still finding a way to make this happen. All right!

The "Overwhelmingly Large Telescope"?? Really? I'm waiting for one to be named the GHBT -- Great Honking Big Telecope 🙂