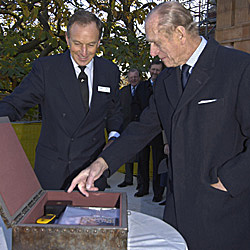 On November 17th, Prince Philip (right) and Roy Clare, director of the National Maritime Museum (NMM), sealed a time capsule marking the end of the fundraising drive for the Royal Observatory Greenwich. The capsule will go on display at the observatory's new planetarium, which should be finished in 2007. Its contents, which include a handheld GPS receiver (yellow) donated by Clare, may seem dated indeed when it is opened in 2105.

Britain's Royal Observatory Greenwich, home of Greenwich Mean Time and the world's prime-meridian (0°) longitude, has announced the successful completion of its fundraising campaign for renovation and construction.

"I'm thrilled to confirm that, since the wonderful article on the Royal Observatory Greenwich in the August 2005 Sky & Telescope, we've been successful in raising more than £4 million," ($7 million), says Roy Clare, director of the National Maritime Museum, which oversees the observatory. This completes the campaign's £15 million goal. The latest funds came from a £3 million pledge from the Peter Harrison Foundation and a £1 million donation from the Lloyd's Register Educational Trust. 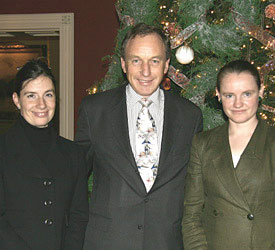 On December 8th, Roy Clare gave a talk about Admiral Nelson and Napoleon as well as the museum's future plans at the Somerset Club in Boston. With him were Lucy Cooke (left), the National Maritime Museum's head of corporate development, and Sian Flynn, the museum's head of exhibitions.

"This achievement — a year ahead of schedule — is a tribute to the prestige of the project and the staff who have worked so hard to advance the cause," adds Clare. "But it's also evidence that astronomy and time are subjects that captivate the imagination of people."

The funds will be used to implement the observatory's Time and Space redevelopment project. The first phase of the project, expected to be completed in March 2006, features the construction of six new visitor galleries and a horology center, and the refurbishment of the 17th-century Flamsteed House. The second phase will be to construct an innovative, state-of-the-art 120-seat planetarium and an astronomy-education center; these should open in spring 2007.

"We look forward to welcoming readers of S&T among the observatory's 800,000 annual visitors in the coming years," says Clare. For more information, see the National Maritime Museum's Web site.