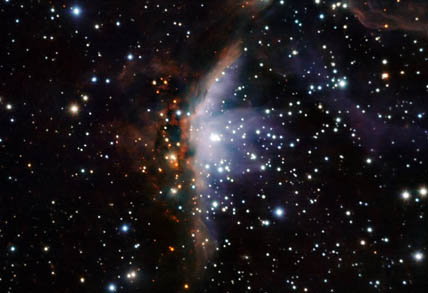 Gum 19 is a star-forming region located in Vela. This false-color composite from the New Technology Telescope in Chile incorporates images taken at three infrared wavelengths. Click on the image to see a larger view, which is 4.7 arcminutes across.

In 1955, Australian astrophysicist Colin S. Gum published a catalog of more than 80 southern nebulae that glow in the light of ionized hydrogen (H II). One of the lesser known — but most interesting — of these is Gum 19, located about 22,000 light-years away in the constellation Vela.

A new and provocative view of Gum 19 has been released by the European Southern Observatory. Observers used Sofi, an infrared spectrograph and imager mounted on the ESO's New Technology Telescope (NTT) in Chile, to record the nebula at three wavelengths out to 2.2 microns. Although faint in visible light, the new infrared view reveals this little nebula to be dark on one half and bright on the other, punctuated by a bright stripe of nebulosity slashing vertically through its midsection. The bright half of this Janus-like appearance results from illumination by a supergiant blue star called V391 Velorum. New stars are forming both there and in the clouds of dark material on the left.

With a surface temperature near 50,000°F (30,000°C), massive V391 Velorum has a temperamental nature, Its brightness can fluctuate suddenly, likely caused when it ejects shells of matter into the surrounding space. Stars in this mass range typically exist for only 10 million years before exploding as a supernova.

As noted in the ESO's online press release, Gum 19 has an eerie “rip in space-time” look to it in the infrared, with a narrow, near-vertical bright region slashing its middle. Thousands of years from now, the blink of an eye in astronomical terms, V391 Velorum's demise will likely alter forever the intriguing appearance that Gum 19 has now.