Has a Tunguska Crater Been Found? 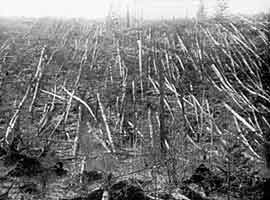 Trees near the Tunguska River in Siberia still looked devastated nearly two decades after a large meteorite exploded above the ground in June 1908. The Tunguska event, which ranks as one of the most violent cosmic impacts of this century, leveled roughly 800 square miles of Siberian taiga.

Here's a story that just hit our radar screen, and we wanted to share the news immediately rather than wait for further facts to come out. In the online journal Terra Nova, a team of Italian researchers led by marine geologist Luca Gasperini reports on what may be the missing Tunguska impact crater.

Tunguska is a household name for meteorite enthusiasts. It's the best-known destructive impact to have occurred in the modern era, a blast that destroyed some 800 square miles of remote forest near the Tunguska River in eastern Siberia on the morning of June 30, 1908. Something — a small asteroid or comet — entered the atmosphere and exploded with a force equal to about 15 million tons of TNT. That's 1,000 times more powerful than the atomic bomb dropped on Hiroshima, Japan. Experts think the blast occurred some 5 miles above the ground, and— here's the catch — no crater, not even the tiniest trace of the impactor, has ever been found.

Gasperini's team suspects that Lake Cheko, located some 5 miles north-northwest of the blast's suspected epicenter was gouged out when the impactor struck and later filled with water. The region is remote, and it's unclear from old maps whether the lake existed before 1908.

The team's investigation of the lake bottom's geology revealed a strange funnel-like shape that differs from those of neighboring lakes but is consistent with an impact origin. They go on to say that it might have formed from a fragment of the main-body explosion.

They hope a future drilling effort will settle the mystery. We'll dig a little deeper too and share more as we learn it.