On September 17th, the International Astronomical Union announced that an object in the Kuiper Belt — the fifth solar-system body large enough to qualify as a "dwarf planet" — had been named. It'll be called Haumea (pronounced how-MAY-uh), after the goddess of childbirth and fertility in Hawaiian mythology.

But there's far more to the story. When it comes to naming Kuiper Belt objects, the IAU typically accommodates whatever's suggested by the discoverer(s). In the case of Haumea, formerly designated 2003 EL61 and now formally numbered minor planet 136108, there's debate — controversy, actually — over who discovered it. 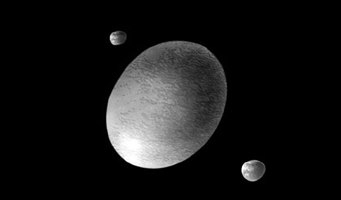 Haumea is the name suggested by Michael Brown (Caltech), who together with Chad Trujillo and David Rabinowitz spotted it on December 28, 2004. But Brown didn't report his team's observations right away to the IAU's clearinghouse for such discoveries, the Minor Planet Center in Cambridge, Massachusetts, as he explains on his website. Instead, he and others continued to scrutinize this relatively bright and thus sizable body — learning a month later, for example, that it had a moon. (They eventually found a second moon as well.)

In July 2005, just as Brown was preparing to announce all this, Spanish astronomers Pablo Santos-Sanz and José Luis Ortiz Moreno sent the MPC some observations of the same object taken two years earlier at little-known Sierra Nevada Observatory. What's become clear since then is that the Spaniards accessed the American team's publicly accessible observing records 39 hours before submitting their discovery claim to the MPC but, they insist, after deducing the existence of 2003 EL61 themselves.

To recap: Brown's team chanced upon the object first, but the Spanish observers reported its discovery first. There's still bad blood over this, and it's not likely to be resolved soon. For now, the MPC's record for asteroid 136108 lists "Sierra Nevada" as both the discoverer(s) and the discovery site, though those details are omitted from Haumea's official naming citation. But you won't find the discoverers' names listed next to Sierra Nevada (which is apparently how the Spaniards wanted it).

So why didn't 2003 EL61 get christened Ataecina, the name suggested by Ortiz and his colleagues? Ataecina was a goddess worshiped by ancient inhabitants of the Iberian peninsula, and she was usually associated to Proserpina, Roman goddess of the underworld. Therein lies the problem: by IAU convention, deities of the underworld are reserved for objects in Pluto-like orbits (in resonance with Neptune), which 2003 EL61 is not.

Brown's team proposed not only Haumea but also Hi'iaka and Namaka (two of Haumea's many children) for the two moons. It all fits together nicely.

But there's been plenty of behind-the-scenes rancor about how these names gained approval. Two groups, the Working Group for Planetary System Nomenclature and the Committee for Small-Body Nomenclature, were under pressure from IAU general secretary General Secretary Karel van der Hucht to resolve the 2003 EL61 naming issue quickly. However, the CSBN's vote on Haumea ended in a tie or at best a slim majority, depending on who's doing the tallying (some of its members sit on the WGPSN as well).

Since the IAU wasn't bound to accept the name proposed by either team, one wonders why the WGPSN and CSBN didn't work harder to come up with something more politically neutral.

Oh, by the way, here's a question for any CSBN or WGPSN members who happen to read this: Is Ceres a dwarf planet? I know that was the IAU's intention when the controversial Pluto votes were cast back in 2006 — but unless I'm missing something, the approved resolutions never mention Ceres.

If people do not put in a claim within say a month of the claimed sighting, then they should forfeit the right to a claim. Waiting a year or more seems a bit silly to me. Any reasonable time limit should be set with a discretionary waiver available to the IAU. How did the Spanish claim fall through the cracks in the claim system? Also it is a bit naughty of the IAU to now name the object when they are aware of the dispute? Regards Den

Who gets the credit for finding Haumea? That's easy -- apply the rules.

Don't put your observing records where the Sierra Nevada bandits can find 'em.

The "Questions and Answers" page is at http://www.iau.org/public_press/news/release/iau0603/questions_answers/.

First, if you go back to the original IAU press release, their artist's sketch of the new Solar System does show Ceres as a dwarf planet.