Asteroid 25143 Itokawa, as seen on September 10, 2005, two days before the arrival of Japan's Hayabusa spacecraft. The very irregular and elongated shape hints that this 600-meter-long body is a fragment from the breakup of a much larger asteroid.

After a series of programmatic setbacks, including the recent loss of a key instrument on the Suzaku X-ray observatory, Japanese space scientists finally have something to cheer about. This morning at 1:00 Universal Time, at a point some 320 million kilometers (200 million miles) from Earth, a spacecraft named Hayabusa reached asteroid 25143 Itokawa and eased into position just 20 kilometers away from it.

For the next two weeks the spacecraft will maintain its 20-km standoff distance on the asteroid's sunlit side, moving inward to just 7 km away by month's end, to map the entire surface as Itokawa slowly rotates every 12.1 hours. In addition to its Asteroid Multiband Imaging Camera (AMICA), which records light at seven visible and infrared wavelengths, Hayabusa carries a laser altimeter to measure surface heights and two spectrometers to analyze mineral compositions. Initial images from the camera show that Itokawa is about 600 meters long and very elongated, appearing much as expected from ground-based scrutiny. 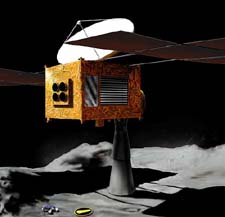 The Japanese spacecraft Hayabusa ('Falcon') prepares to obtain a sample of the asteroid 25143 Itokawa. A metal pellet fired down through the cone will kick up surface matter for collection.

But Hayabusa, which means "falcon" in Japanese, is far more than a reconnaissance platform. In early November, if all is going as planned, the half-ton spacecraft will gently guide itself onto the surface, touching down at a carefully chosen location. Then it will fire a 5-gram tantalum pellet into the asteroidal grit at 300 meters per second — a punch energetic enough to spray surface material into a collection funnel. Up to three such samplings are possible before early December, when Hayabusa begins its return trip to Earth.

The spacecraft will also deploy a small lander, called Minerva, designed to hop from spot to spot for a few days and view the landscape with three cameras.

Hayabusa should make it back to Earth in June 2007, when its sample container, sealed to protect its thimbleful of asteroid, will plunge through the atmosphere and parachute into the Australian Outback.

Itokawa is an Apollo-type asteroid whose orbit crosses that of Earth over time and thus represents a potential impact threat. Its 1.5-year orbit frequently brings it near the Earth — most recently in 2001 and 2004, when observatories and radar antennas studied it intensively.

The flight team at the Japan Aerospace Exploration Agency, or JAXA, designed Hayabusa primarily as an engineering testbed. Launched on May 9, 2003, the spacecraft (formerly known as MUSES C) made its way to Itokawa using an ultra-efficient engine powered by high-speed xenon ions, rather than by more conventional rocket fuels. It is also equipped with an autonomous navaigation system that rendezvoused with Itokawa without direct control from Earth.