Hayabusa Closes In on Asteroid Itokawa 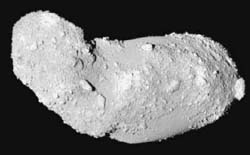 The Hayabusa spacecraft acquired this view of 25143 Itokawa on October 4, 2005, hours after moving to within 7 kilometers of the asteroid. Note the rough-textured terrain and general absence of impact craters.

The Japanese spacecraft Hayabusa has eased to within 7 kilometers of asteroid 25143 Itokawa,
setting the stage for a "grab and go" sampling effort next month. That's when the half-ton spacecraft is scheduled to gently touch down at a carefully chosen location, fire a 5-gram pellet into the surface, and collect some of the resulting debris cloud in a collection funnel.

But before that can happen, the spacecraft must complete a detailed reconnaissance of Itokawa. After its arrival on September 12th, Hayabusa (Japanese for "falcon") maintained a 20-km standoff distance. The new, closer vantage point, reached on September 30th, will allow mission scientists to create a high-definition model of Itokawa's shape using images and laser altimetry. They'll also study results from two infrared spectrometers to identify target areas with interesting compositions. 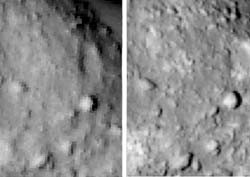 Close-up views of the surface of asteroid Itokawa, as seen by Hayabusa from distances of 20 (left) and 7 kilometers (right). The spacecraft's Asteroid Multiband Imaging Camera (AMICA) records light at seven visible and infrared wavelengths.

The improved views show a rugged surface that's littered with boulders but virtually devoid of impact craters. In some places the terrain is very smooth and flat, suggesting "ponds" of fine dust. Similar ponding was found on the asteroid 433 Eros by NASA's NEAR-Shoemaker spacecraft. Geologists suspect that Eros's smoothness and lack of craters resulted from the jolt of a recent impact, which caused loose surface material to redistribute into low-lying areas.

Generally the mission has been going well, according to a status report released by the Japan Aerospace Exploration Agency (JAXA). Hayabusa's automated navigation system has kept the craft hovering over the asteroid's sunlit half and has controlled the pointing of its camera and other intruments. As of October 4th the detailed mapping of Itokawa was nearly complete.

But concern has mounted since the loss on October 2nd of an attitude-stabilizing "control wheel." Another wheel malfunctioned back on July 31st, leaving just one such unit — plus two thruster rockets — to maintain the spacecraft's orientation. Engineers are studying how to reduce the thrusters' fuel consumption so that the sampling can occur as planned.

In December the spacecraft will use its ion-propulsion engine to begin the return trip to Earth, and a canister bearing two tiny samples should be in scientists' waiting hands by June 2007. Hayabusa also carries a small hopping lander, called Minerva, that will photograph the surface from several locations. 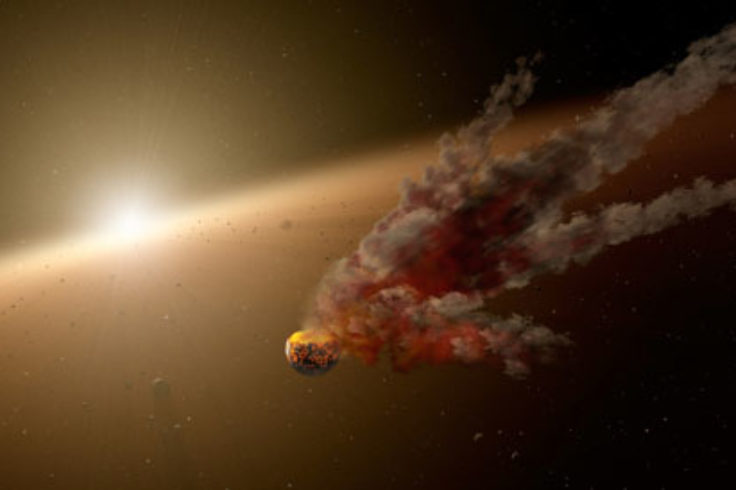 Find New Worlds, Film an Eclipse & Do Some Citizen Science!