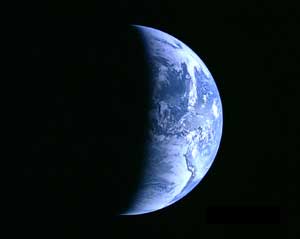 Today the Japan Aerospace Exploration Agency (JAXA) released an image from the first high-definition television camera launched into space. The camera, built by NHK (Japan Broadcasting Corporation), is aboard the Moon-bound Kaguya spacecraft, which was launched two weeks ago, and is scheduled to enter lunar orbit on October 4th. The image of Earth was captured on September 29th (Japan time) as part of movie, but the full video has not been released.

I can only hope that even as the spacecraft starts orbiting the Moon, that mission controllers will point the camera back at Earth a few more times. Despite decades of space exploration, there aren't any full-Earth images to serve as computer-desktop wallpaper. And just think of the video that will undoubtedly appear on HD channels in the near future.

*No* images suitable for computer desktops? What about this recent release at 2048x2048?
http://visibleearth.nasa.gov/view_rec.php?id=2429

I thought it was beautiful! Of course, I also really like the Japanese HD pic.

Yeah, that image is nice, but I was thinking of a single-frame view by a single camera. That NASA picture is a composite of a bunch of images. To me, that's not much different than a what Seeker or Starry Night could generate.

You can watch the HD video in ACTUAL H D online!