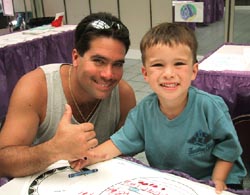 A father and his son color astronomical drawings during Astronomy Day 2002 festivities in Hilo, Hawaii.

The Hilo Astronomy Club has been chosen by the Astronomical League as the top winner for this year’s Sky & Telescope Astronomy Day Award. The prize consists of a commemorative plaque and a $250 gift certificate from Sky Publishing. Club members created a daylong "AstroDay 2K2" program at the Prince Kuhio Plaza shopping mall on Hawaii’s Big Island last April 20th. More than 12,000 people were on hand for guest speakers, native Hawaiian presentations, Starlab planetarium shows, and exhibits and demonstrations from the staff of professional observatories atop Mauna Kea. "There were so many people at some of these exhibits that it was truly standing room only," notes organizer Gary Fujihara. 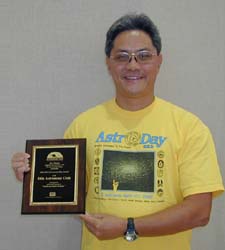 Despite its impressive showing, the Hilo club had only three months to pull everything together. However, because he is a telescope operator for the Subaru telescope, Fujihara was able to coax help from many of his professional colleagues. He was also keenly aware that some Hawaiians are not happy with the growing number of telescopes atop Mauna Kea, so he invited native groups to make Astronomy Day presentations as well.

The Sky & Telescope Astronomy Day Award is presented each year in cooperation with the Astronomical League. Next year's Astronomy Day will be celebrated on May 10th.