Both hot and cool white dwarf stars can display the remains of destroyed planets polluting their atmospheres. There now appear to be two routes for this material to make its way in. 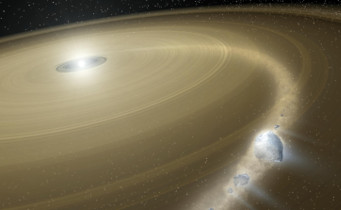 An artist's conception illustrating a comet being torn to shreds by a white dwarf star.

Aristotle believed the heavens were pristine, made of a substance pure and incorruptible. It took a few brave men, namely Copernicus and Galileo, before the Aristotelian view shattered.

It’s a cycle that continues today, as scientists find bumps in their data and mismatches to their pristine mathematical theories.

Until fairly recently astronomers thought that white dwarfs — the super-dense remains of Sun-like stars that ran out of fuel and collapsed to about the size of the Earth — had atmospheres of pure hydrogen or, in stars lacking hydrogen, pure helium, but in either case completely devoid of heavy elements.

A white dwarf’s intense surface gravity (typically 100,000 times Earth’s) ought to pull all but the lightest element down into its depths. But once again research shattered a picture-perfect theory.

Astronomers observe instead that at least a quarter of white dwarfs show atmospheres polluted with heavy elements. This led to a new theory, now well accepted: because this material should sink out of sight in just a few days, it must be continually fed onto the star’s surface. Indeed, if planets or asteroids pass too close to a white dwarf, they would shred into dust particles, form a disk around the star, and then slowly rain down over time.

Such close passages are to be expected. As a star evolves to its end stage as a white dwarf it loses mass, enlarging all the orbits in its system of planets. Eventually two planets would fall into a resonance as their orbits migrated, which would end up torquing them wildly. They would then interfere with other planets’ orbits, and the chaos would spread until most or all planets were in wild, elliptical, unstable orbits that would occasionally bring one too close to the star.

The dust-disk scenario for continuously polluting the star’s surface works well for relatively cool white dwarfs, those with temperatures below 20,000 K.

But at hotter temperatures, the picture is more complex. Radiation pressure can overpower the downward force of gravity, levitating heavy atoms to float in the white dwarf’s atmosphere. So the observed metal abundances in these are hard to interpret.

The first comprehensive study of radiative levitation in hot white dwarfs has now been carried out by Martin Barstow (University of Leicester) and colleagues. They worked out the upward force of radiative levitation compared to the downward pull of gravity to predict, for the first time, a specific abundance of heavy elements in these stellar atmospheres.

The team then compared their models with observations of 89 white dwarfs having temperatures from 16,000 to 77,000 K, using archived data from NASA’s Far Ultraviolet Spectroscopic Explorer (FUSE). 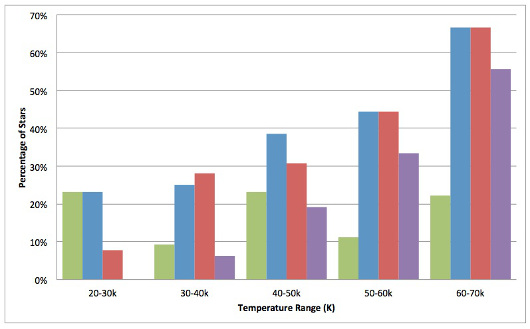 The fraction of stars with detected heavy elements as a function of effective temperature (in 10000 K bins) by element: carbon (green), silicon (blue), phosphorous (red) and sulphur (purple).

The results were very clear: for hot white dwarfs, the observations don’t match the predicted abundances of heavy metals based on atmospheric models alone. Radiative levitation cannot be the only mechanism acting in these stars, says Barstow.

Some of the stars observed in the study have metal abundances far lower than predicted. Others show metal abundances that are through the roof. But overall roughly a quarter of hot white dwarfs are polluted with heavy elements — the same fraction as for cool white dwarfs.

Where heavy elements are detected at all, its clear that the hot white dwarfs must be accreting planetary material. But unlike the dusty debris that cooler white dwarfs collect, hot ones must consume gaseous material. That's because planets or asteroids passing too close to a hot white dwarf would vaporize rather than form a dust disk. Gas would spiral down onto the surface much faster than the solid particles accreting onto a cool white dwarf. But even though the supply for hot white dwarfs must come in episodic bursts rather than as a slow, steady rain, the heavy elements will likely remain in the atmosphere for a long time due to radiative levitation.

At least that's the theory. And now this comprehensive study provides the observations that fill the gap between cooler and hotter white dwarfs where previously there had only been suspicion, says white dwarf expert Jay Farihi (University College London).

These cannibalistic scenarios may be showing the future of our solar system some 7 billion years out. Even if the Earth avoids the Sun’s swelling outer layer during the red-giant phase (this remains unclear), it will likely end up as scum in the atmosphere of the white-dwarf Sun.

Another strange observation about white dwarf stars that is not understood within the context of conventional astrophysics is that white dwarf masses tend to have preferred masses at discrete multiples of 0.145 solar mass, as predicted by a new cosmological paradigm called Discrete Scale Relativity.

Here is a link to 15 definitive predictions of DSR:
http://www.academia.edu/2917630/Predictions_of_Discrete_Scale_Relativity

Dear Robert, what is the strange character following the upper case "M"s in your post?

Sorry but the copied material used the solar mass symbol and it did not get reproduced properly.

I see just an M and a space. No strange characters.

Thank you, Robert. So, this is supposed to be that little (astrological) sun symbol (a circle with a dot in the middle), put as a subscript index to the "M". Strange that you should not see it (a blank instead), whereas I see this little square with four strange abstract looking symbols in it, like "F0" and "9D" underneath. I am using "firefox" with a "Times New Roman" font and a language setting of "US English" and "British English".

Thank you, Robert. So, this is supposed to be that little (astrological) sun symbol (a circle with a dot in the middle), put as a subscript index to the "M". Strange that you should not see it (a blank instead), whereas I see this little square with four strange abstract looking symbols in it, like "F0" and "9D" underneath. I am using "firefox" with a "Times New Roman" font and a language setting of "US English" and "British English".