With all the attention that astronomers have lavished on old Sol over the centuries, you'd think that by now they'd know its diameter to, oh, 10 or 12 significant digits. 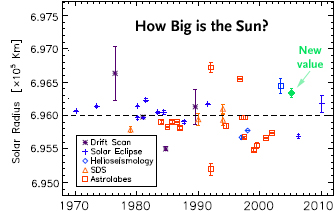 During the past 40 years, astronomers have attempted to measure the Sun's sizedozens of times using various methods. The dashed line corresponds to a radius of 696,000 km, the value most often used.

Nope. While the Sun's girth has indeed been measured dozens of times over the past 40 years, the results haven't converged on a single value and scatter by as much as ± 0.1%. One big reason is that, though some measurement techniques are extremely precise, their accuracy suffers because of the turbulence induced by Earth's atmosphere. Most often astronomers use a compromise value of 865,000 miles (1,392,000 km).

So Marcelo Emilio (State university of Ponta Grossa, Brazil) has teamed with observers at the University of Hawaii and Stanford to approach this measurement with, literally, space-age techniques. They used images taken by the Michelson Doppler Imager (MDI) aboard the Solar and Heliospheric Observatory (SOHO), homing in on transits of the planet Mercury across the solar disk in 2003 and 2006. 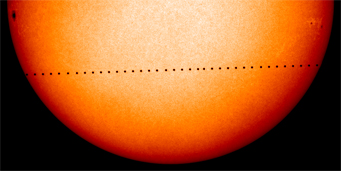 Mercury's path across the solar disk as recorded by an instrument on the Solar and Heliospheric Observatory (SOHO) on November 8, 2006. Click here for a larger version.

This makes perfect sense. The spacecraft sits at the L1 Lagrange point, a million miles from Earth, and Mercury has nothing but the barest wisps of atmosphere — a made-to-order combination for crisp images. (The SOHO team has posted a movie of 2006 transit).

However, as the team describes in a forthcoming issue of Astrophysical Journal, the technique wasn't without its complications.

For example, the MDI takes images that are 1,024 pixels on a side — state of the art when the spacecraft was built during the 1990s, but still yielding a modest resolution of 4 arcseconds in its full-Sun imaging mode. That's a bit less than half of Mercury's diameter during each transit. Also picking the instrument's focus point also affects the crispness of the planet's silhouette against the solar disk. And then there's the matter of where, exactly, to place the "edge" of the of the Sun's photosphere.

Taking all these factors into consideration, Emilio and his collaborators peg the diameter of the Sun at 865,374 miles (1,392,684 km), plus or minus about 0.01%. And they got the same solar size during both transits, confirming (as this same group reported two years ago) that the Sun's diameter is "rock steady."

It should be possible for researchers to improve on this new value when Venus transits the Sun in just a couple of months (76 days to be exact). This time astronomers can use the Solar Dynamics Observatory, which can take images with four times better resolution than SOHO. "SDO will be able to see the transit of Venus in June and we have several activities planned," according to project scientist Dean Pesnell. In fact, the SDO team has launched its own transit website, though it's still under development.

Have you noticed the increasing drumbeat of stories and shows depicting impending doom from some type of solar eruption? It's nice to have the scentific proof that, as Kelly puts it, "old Sol" is "rock steady."

SOHO is a mission of international cooperation between the European Space Agency (ESA) and NASA. ESA designed the mission, the spacecraft was built for them in Europe, and nine of the twelve principal investigator-led experiments on board were funded by European national funding agencies or ESA. MDI is one of the three NASA-furnished instruments. The spacecraft was launched on a US launch vehicle (an Atlas IIAS) and is operated from NASA Goddard Space Flight Center.

Joe: you're absolutely right — I should have caught that. I've removed the NASA attribution.