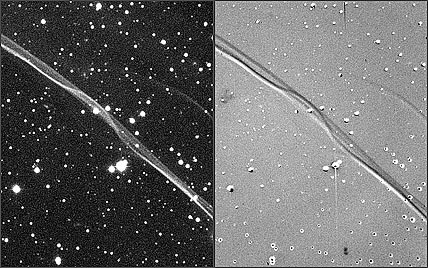 The strongest wisp in the expanding shell from Supernova 1006. We're looking edge-on at the thin surface of the huge bubble. In the image at right, a 1998 view has been subtracted from a 1987 view, showing the differences between them; the white trace marks the wisp's position in 1987, and the dark trace shows where it had moved to by 1998. An animation is available (3.2 MB QuickTime movie).

The brightest star seen in recorded human history was the supernova of the year 1006, which appeared in the constellation Lupus south of Scorpius. Accounts from China, Japan, and Arab lands describe a new star that was so bright it lit the landscape. It took three years to fade from view.

Now astronomers have pinpointed the distance of Supernova 1006 and, they think, its true brightness.

All that's visible now is an extremely faint, expanding circular shell ½° wide. Astronomers first detected the supernova remnant by its radio emission in 1965, then by X-rays in 1976. That same year astronomers first reported finding traces of visible-light wisps at the remnant's edges.

This value finally offers a good answer to an old mystery: How bright was Supernova 1006, really?

Several lines of evidence indicate that it was a supernova of Type Ia — the kind caused by a white-dwarf star exploding completely in a runaway thermonuclear reaction. All of these explode with very nearly the same brightness, making them excellent "standard candles." A Type-Ia supernova at the newly determined distance would shine with a peak brightness between magnitude –7.1 and –7.9, taking all uncertainties into account.

That's more than a dozen times brighter than Venus and on the way to the brightness of the quarter Moon. It's in the middle of the wide range of estimates for the supernova that have been based on the rather vague historical accounts.

What would a star that bright actually look like? Compare brilliant Jupiter shining overhead these evenings with the relatively dim stars of Orion's Belt. "At its peak," says Winkler in a statement, "the supernova of 1006 would have appeared about as much brighter compared to Jupiter now, as Jupiter is in comparison to the faintest star in Orion's Belt."

And considering its low altitude in the south, he says, "It must have been twinkling like crazy."

The May Sky & Telescope, out soon, features more about historical supernovae as its cover story.