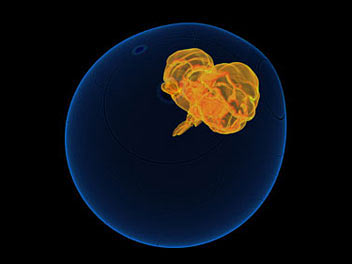 A frame from a three-dimensional simulation of a Type Ia supernova, moments after a nuclear flame-bubble ignited just a trace off-center in the progenitor white dwarf star.

Picture an exploding star. You probably picture a round ball going boom in a round way. But real supernovae apparently aren't like that at all.

Astronomers have realized for a few years now that Type II supernovae — the kind that result from the collapse of a massive supergiant star's core — explode from the inside like a ball suddenly growing a spindle, at least in some cases. Very likely, the tiny collapsing core emits two incredibly powerful jets along its axis of rotation, and these play the major role in blowing the entire rest of the star apart. In extreme cases, the jets power a gamma-ray burst directed along their flight lines after they break out of the star's poles. In lesser cases, the jets may not make it out of the star at all, but still cause the explosion to be asymmetrical. (See "Supernovae Are Not Round" in Sky & Telescope, January 2002, page 40.)

That's a Type II blast. Entirely different are Type Ia supernovae. These get their energy not from gravitational collapse inside a supergiant, but from a tiny white dwarf star that becomes overloaded with mass and explodes via thermonuclear fusion like a big hydrogen bomb (except that it's carbon, not hydrogen, that fuses).

Presumably, the added mass that nudges the white dwarf over its tipping point is gas that's been slowly spilling onto it from a close binary companion star — at least according to the most widely accepted theory.

Now it appears that Type Ia supernovae are not round either. 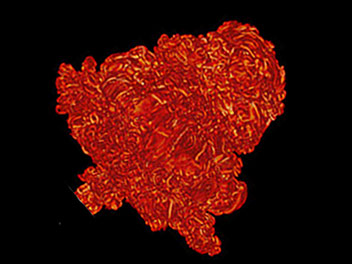 A close-up, high-resolution image of the nuclear flame bubble on its way up. This image depicts the complex, turbulent hydrodynamical processes that shape the nuclear-burning surface.

Nothing about these events is intuitive. The temperatures, densities, sizes, in fact all the physics are so extreme that our earthly habits of imagining things aren't much good. The only way to figure out what happens is to follow the fundamental physics from the ground up.

That's what supercomputers are for. Last Friday, astrophysicists at the University of Chicago announced that they've used a supercomputer to run preliminary 3-D simulations of what happens when an overloaded white dwarf gets too burdened and thermonuclear fusion begins at a spot close to its center. They plan to do more of this modeling work using the Blue Gene/P supercomputer at Argonne National Laboratory.

As it turns out, the white dwarf doesn't detonate as if it were a ball of TNT, with the explosion proceeding in a shock front faster than the speed of sound in the material. Instead, the star deflagrates, at least at first, with a thermonuclear "flame" spreading through the star's interior slower than the local speed of sound. If a detonation goes bang, a deflagration goes whoosh.

And, weirdly, the first whooshed part forms a superhot, low-density bubble that quickly rises from the center (first two pictures above). The bubble bursts through one side of the star in less than a second, so intense is the white dwarf's gravity pulling the rest of the star's dense matter inward. 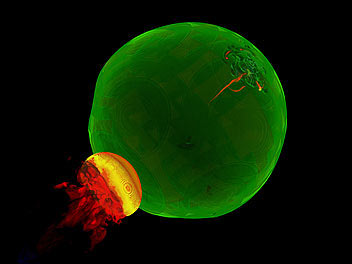 Finally, a detonation begins on the opposite side of the star from the bubble's breakout. This freeze-frame is very shortly after the moment of detonation, as a shock wave starts rapidly burning through the star's remaining material.

Then things really get weird. “The fast-moving [thermonuclear] ash stays confined to the surface, flows around the white dwarf and collides on the opposite side of the breakout,” says team member Cal Jordan. There the colliding material finally triggers a detonation, which quickly incinerates the rest of the star with a shock-wave bang. The start of the detonation is shown in the frame at right.

Read the press release, and watch the movies. Enjoy.