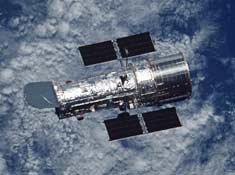 The Hubble Space Telescope, with its aperture door open (at left), gets back to work after its last servicing by shuttle astronauts in March 2002.

The fate of the Hubble Space Telescope (HST) remains uncertain as astronomers, the public, and Congress continue to question whether NASA administrator Sean O'Keefe was justified in deciding to stop servicing the orbiting observatory. Without another upgrade by Space Shuttle astronauts, the telescope will cease to function within the next few years rather than last till the end of the decade, as astronomers had hoped. O'Keefe announced his surprise ruling on January 16th; since then, growing opposition to the decision has kept him and his deputies on the defensive. With Congress set to hold hearings this week on the space agency's budget and on President George W. Bush's plan to send astronauts to the Moon and Mars, there's no sign that the controversy will subside anytime soon.

O'Keefe maintains that his decision was based on concerns over shuttle safety following last year's Columbia disaster. When the Columbia Accident Investigation Board (CAIB) released its report in August, O'Keefe pledged that NASA would meet or exceed all its recommendations. Among these is developing the ability to inspect and repair damage to the shuttle once it reaches orbit. This capability is proving difficult enough to ensure on flights to the International Space Station (ISS), which offers ample room for tools and equipment and can serve as a safe haven for the crew of a stricken shuttle. Achieving the same capability for a visit to Hubble — the rocket plane's only remaining non-ISS destination — is even harder and would, according to O'Keefe, require the development of tools and techniques that would have no further uses. Moreover, if a shuttle bound for Hubble were to become damaged and unable to return to Earth, NASA would have no alternative but to rush another vehicle into orbit for a daring rescue mission, something O'Keefe rules out as unacceptably risky.

O'Keefe admits it wasn't easy halting plans to maintain Hubble. "It was a brutal decision," he told Sky & Telescope. "I really agonized over it."

Many people both inside and outside the space agency are wondering if despite his careful deliberations, O'Keefe came to the wrong conclusion. On Saturday, February 7th, the New York Times cited reports from anonymous NASA sources that dispute O'Keefe's assessment of the relative risks of shuttle flights to Hubble and the ISS. Sky & Telescope subsequently obtained copies of these "white papers," one of which concludes that a Hubble servicing mission "requires few, if any, unique capabilities to ensure safe flight beyond those developed for flights to the ISS." The study also says that by some measures, such as the threat of micrometeoroid damage, "the aggregate risks are higher for ISS flights than for a flight to HST."

The white papers circulated rapidly and widely among members of the Hubble team and their supporters, including key members of Congress who control NASA's funding. On Monday afternoon NASA managers convened an impromptu teleconference with reporters to discuss the matter. Former shuttle commander William Readdy, now the agency's associate administrator for space flight, called the risk analysis in the white papers "superficial" and "oversimplified." When asked if he knew the reports' origin, Readdy replied, "I don't think it makes any difference who wrote them — they're opinions." He then stated categorically that administrator O'Keefe had already considered all the risk-and-safety issues involved in servicing Hubble in more depth and detail than is done in the two unsigned reports.

Astronaut John Grunsfeld, a veteran of two flights to Hubble and now NASA's chief scientist, said that O'Keefe's decision was "a tough call," but a prudent one. He and Readdy explained that the white papers ignore the high risk of preparing two shuttles to fly at the same time in case one is needed to come to the aid of the other. The CAIB cited launch-schedule pressure as a major factor in the Columbia disaster, and as Readdy put it during the teleconference, a rescue mission would involve "schedule pressure in the extreme."

NASA's space-science chief, Edward Weiler, says there's another consideration missing from the white papers. "On an HST flight," he told Sky & Telescope, "it takes one problem to create a safe-return issue, namely, a foam strike" like the one that punched a hole in Columbia's wing at liftoff. "On an ISS flight," Weiler said, "it takes a foam strike and a failure in the propulsion system." O'Keefe added that the likelihood of a shuttle sustaining launch damage and failing to reach the ISS is "vanishingly small," thus making flights to the station inherently less risky than flights to Hubble.

In the end, it comes down to a judgment call, and O'Keefe told Sky & Telescope that the responsibility for making that call is his alone. "This is the bottom line," he said. "On the day a flight launches, everybody who has an opinion will be somewhere else. The only ones who will be here are those of us who have to decide if it's safe to fly, and we have to be able to say we did everything we could to minimize risk."

Still, says O'Keefe, he welcomes other's opinions, particularly that of Admiral Harold Gehman, chair of the now-disbanded CAIB. At the urging of Senator Barbara Mikulski (D-MD), a longtime Hubble supporter whose state hosts the Space Telescope Science Institute, the administrator asked Gehman to offer his unique perspective on the relative risks of flying to Hubble and the ISS. CAIB spokesperson Laura Brown says Gehman expects to offer his opinion "within the next few weeks." O'Keefe refused to be pinned down on what he might do if Gehman suggests that one more flight to Hubble makes sense after all.

Meanwhile, on Wednesday and Thursday the House Science Committee will begin debating the merits of next year's proposed NASA budget and the new space policy unveiled by President Bush on January 14th. Highlights of Bush's new directive include finishing ISS construction and phasing out the shuttle by 2010, returning astronauts to the Moon by 2020, and then sending humans to Mars a decade or so later. When O'Keefe's decision to stop servicing Hubble followed the president's announcement by just two days, astronomers assumed there was a connection and feared that other space-science missions would be abandoned too. But on February 2nd, when the president submitted his budget request for next year, it included funds for all of NASA's highest-priority space telescopes and interplanetary probes. "Space science is alive and well," reports Weiler.

For Hubble's disappointed supporters, there may yet be a shred of hope. "The president's proposed new space plan, and the resulting proposed cancellation of the Hubble servicing mission, have not yet been approved by Congress," says Heidi Tringe, an aide to House Science Committee chair Rep. Sherwood Boehlert (R-NY). "There haven't been any decisions made, but it's certainly conceivable that Congress would direct the [NASA] administrator, either formally or informally, to alter that plan and continue with the Hubble servicing mission."

Sky & Telescope will continue to cover this story as developments warrant. For more information, see the earlier stories linked below, as well as the following items:

Final Report of the Columbia Accident Investigation Board (CAIB)

Interim Report of the Return To Flight (Stafford-Covey) Task Group