Hubble Gets a Shot in the Arm 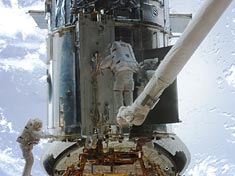 Astronauts have serviced the Hubble Space Telescope four times, most recently in March 2002. A high-level panel of experts says they should do it once more.

The smoldering controversy over the future of the Hubble Space Telescope (HST) has flared up again. On December 8th, after a six-month study, a blue-ribbon panel of experts recommended that NASA should do exactly what agency administrator Sean O'Keefe has said he won't do: return Space Shuttle astronauts to the orbiting observatory to make repairs and upgrades. The committee concluded that NASA's proposed alternative, an unprecedented robotic servicing mission, is unlikely to get off the ground by 2007 or 2008, when Hubble's remaining batteries and gyroscopes are expected to give out.

Hubble's latest troubles began in mid-January 2004, when O'Keefe canceled future servicing missions out of concerns for astronaut safety in the wake of the Columbia disaster. When astronomers, the public, and the US Congress reacted with outrage, NASA began looking at the robotic option as a less risky alternative, and the National Academy of Sciences was called in to provide an independent assessment.

Before examining how best to extend Hubble's scientific life, Louis J. Lanzerotti (New Jersey Institute of Technology and Bell Laboratories, Lucent Technologies) and his team of top scientists, engineers, and aerospace-industry executives evaluated whether Hubble is worth saving at all. They decided it is. "Hubble is an extraordinary accomplishment that has had major scientific and public impact and that has the capacity to do so for years to come," Lanzerotti said at a press conference. His committee concluded that all the tasks originally slated for the next servicing mission — including replacing gyroscopes, batteries, and a fine-guidance sensor and adding two new scientific instruments — are critically important. The only question is how to carry them out.

Astronauts have serviced Hubble four times already in some of the most dramatic missions in the entire shuttle program. But after the loss of Columbia, O'Keefe no longer wants to send astronauts anywhere other than to the International Space Station (ISS), where they can await rescue if their craft is damaged during liftoff.

But if you analyze all the dangers associated with shuttle flights, says Lanzerotti, "the difference between the risk faced by the crew of a single shuttle mission to the ISS, already accepted by NASA and the nation, and the risk faced by the crew of a shuttle mission to the Hubble is very small." Given the potential scientific return of continued Hubble operations and the high likelihood of successful servicing, says Lanzerotti, "such a mission is worth the risk." In contrast, his team concludes, the likelihood of mounting a successful robotic repair mission in time to save Hubble is "remote" — many of the necessary technologies have never been tested in space. 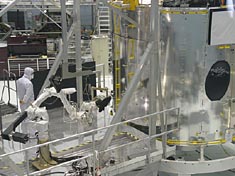 NASA's current plans instead call for the use of a robotic manipulator, such as the one being tested here at the Goddard Space Flight Center.

HST program manager Preston Burch (NASA/Goddard Space Flight Center) says such pessimism is unwarranted. "We're using a robot that has already been designed, built, and qualified for use in space," he says, referring to a dexterous manipulator originally designed for the ISS. "Our approach is to use as much existing hardware and software as possible to save time and minimize risk."

O'Keefe was on vacation and unavailable to comment on the National Academy's report. His spokesperson, Robert Mirelson (NASA Headquarters), told Sky & Telescope, "NASA will not do anything to preclude a Space Shuttle mission" to Hubble but "will continue to work on plans for a robotic mission" while the report is studied in detail over the coming months.

"I'm encouraged by the report," says Steven W. Beckwith, director of the Space Telescope Science Institute. "The committee unequivocally stated that Hubble is worth saving. To me, that's the main message."

The Lanzerotti panel's report is available at www.nap.edu/catalog/11169.html.