The battle over the future of the Hubble Space Telescope has taken a turn for the better, at least from the perspective of the observatory's supporters. The conflict began on January 16th, when NASA administrator Sean O'Keefe shocked astronomers worldwide by announcing that there will be no more Space Shuttle missions to maintain and upgrade the orbiting telescope. Five days later Senator Barbara Mikulski, whose home state of Maryland hosts both the NASA/Goddard Space Flight Center and the Space Telescope Science Institute, sent a letter to O'Keefe asking him to reconsider his decision. In the week thereafter, her request was bolstered by a huge outcry from professional astronomers, backyard stargazers, and the public — including many Sky & Telescope readers who wrote to express their concerns. Apparently bowing to all this pressure, O'Keefe has now agreed to reconsider his decision to abandon Hubble. 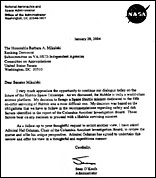 Click on this image to see a legible facsimile of the letter that NASA administrator Sean O'Keefe sent to Sen. Barbara Mikulski (D-MD) on January 28, 2004.

In a letter sent to Mikulski yesterday, the NASA administrator wrote, "I have asked Admiral Hal Gehman, Chair of the Columbia Accident Investigation Board, to review the matter and offer his unique perspective. [He] has agreed to undertake this review and offer his view in a thoughtful and expeditious manner."

Describing his decision to forgo further Hubble servicing as "a most difficult one," O'Keefe nevertheless reminded Mikulski that it was based on his determination that flying the shuttle anywhere other than to the International Space Station (ISS) is just too risky in light of last year's Columbia disaster. Many astronomers have begun to question this, even as they acknowledge that safety is paramount in piloted space flight. The ISS does offer a safe haven for the crew of a stricken shuttle, along with plenty of room for tools and equipment for making repairs. But even on a flight to the ISS, something could go wrong during liftoff, leaving the shuttle in orbit, damaged, and unable to reach the station. Before the shuttle can fly again, NASA needs to make sure the astronauts can deal with such a contingency — to inspect the craft, and perhaps to repair it (rather than to sit tight awaiting rescue by another shuttle). If they are able to do that without help from the ISS, then they should be able to fly to Hubble just as safely.

Mikulski hailed O'Keefe's response. "When someone is told they need major surgery, any prudent person would get a second opinion," she said in a statement released to reporters earlier today. "That's what I told Administrator O'Keefe and that's what he has agreed to do. Hubble has made so many extraordinary contributions to science, exploration, and discovery," she continued. " We cannot prematurely terminate the last servicing mission without a rigorous review."