The Hubble Space Telescope's newest deep space image reveals 5,500 galaxies in a tiny patch of sky in the constellation Fornax. 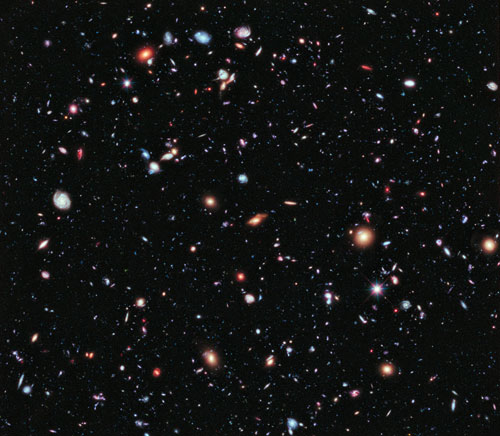 The Hubble eXtreme Deep Field zooms in on a tiny patch of sky in the Fornax constellation, revealing 5,500 galaxies in a new full-color image.

Not many pictures can take you through 13.2 billion years of history. The newest image released by the Hubble Space Telescope does just that. Astronomers compiled the eXtreme Deep Field from hundreds of Hubble Space Telescope images taken over the past decade, amounting to 2 million seconds of exposure time. The most distant galaxy in this image emitted its photons only 450 million years after the Big Bang.

Before the Hubble started snapping pictures of the distant universe, astronomers could only peer across 7 billion light-years, back to a time when the universe was half its current age. Hubble changed that in the late 1990s with the famous Hubble Deep Fields. Long exposures of a tiny, dark patch of sky in the Fornax constellation resolved thousands of galaxies, Hubble’s most powerful illustration of the vast expanse of the universe. The Ultra Deep Field, released in 2004, zoomed in for a narrower, deeper view of 10,000 galaxies.

Now the eXtreme Deep Field zooms in again, focusing on an area roughly half the size of the UDF and capturing 5,500 galaxies, some emitting photons just 450 million years after the Big Bang, in more detail than ever before. The eXtreme Deep Field incorporates observations taken over the past decade, including the Ultra Deep Field observations and many more. See how the Hubble team did it (scroll to the bottom of the page for the slideshow).

While the Ultra Deep Field was taken using four wavelengths of light, from visible to near-infrared wavelengths, the XDF does better. The eight wavelengths used to create the image extend all the way to 1.6 microns, a wavelength roughly twice the length of the reddest color the eye can see. To make galaxies glowing in the infrared visible in the image, the XDF team shifted the color scheme. Galaxies that would normally look yellow to human eyes appear blue in the image, explains Anton Koekemoer (Space Telescope Science Institute), who led production of the visible light portion of the Ultra Deep Field but was not involved in the current Hubble release.

Infrared imaging is crucial for finding the most distant galaxies, explains Garth Illingworth (University of California, Santa Cruz), principal investigator of the Hubble Ultra Deep Field 2009 program. The wavelength of light stretches as the universe expands, so as we look across the universe and back in time, the galaxies get redder and redder. First they’re no longer detected with blue filters, then they disappear from the redder filters. “At some point,” Illingworth says, “there is no light left to detect!”

As remarkable as the latest Hubble image is, it can only find galaxies living in a universe roughly 400 million years old. To see a younger universe, astronomers need images taken with “redder” infrared light. “We need the James Webb Space Telescope,” says Illingworth, referring to the controversial infrared telescope, currently under construction, that is expected to succeed the Hubble.

The Hubble eXtreme Deep Field Observing Team has invited the public to participate in a webinar at 1:00 p.m. EDT on Thursday, Sept. 27. Meet Garth Illingworth, Pascal Oesch, and Dan Magee (UC Santa Cruz), each members of the team that created the image you see above. Visit http://hubblesite.org/go/xdf/ to participate in the webinar.

Thanks for this fascinating article Dr. Young and for your response to Tom’s interesting comment. I believe there are about 41,255 square degrees in the entire celestial sphere. Since there are 60^2 arc minutes per degree^2, there are about 148,518,000 arcmin^2 across the entire sky. So then at 4.6 arcmin^2 this XDF represents 1/32,286,522nds of the whole sky. If this 5500 galaxies per 4.6 acrmin^2 is a fair sampling of the universe at this distance then we can extrapolate the existence of around 1.776x10^11 galaxies, NOT COUNTING all galaxies closer than the distances sampled by the XDF! Therefore the often quoted estimate of 100 billion (1x10^11) would appear to be too low. 300 billion would seem more accurate, but my pure guess is that 1 trillion galaxies may also be on the low side. I wonder how many more the JWST might be able to reel in.

So sad that NASA is getting forced out of space! NASA has been at the forefront of pure scientific research since its inception and its contributions, in many fields besides astronomy, are beyond calculation. What are our legislatures thinking? Why is learning being relegates to the hinterlands? Pure scientific research is one one of the reasons governments exist!! Nobody else can afford to do it!

I have a question that has bothered me for many years.

If we are looking back in deep time with these deep field photos, as I believe we are, why is it that we image more and more galaxies in every direction instead of the original singularity that has been hypothesized?

Bruce, thanks for the math, which makes my head spin. My understanding is that we can only count or estimate the number of galaxies in the volume of space we happen to be able to see from our vantage point, i.e. galaxies that are less that 13.7 billion light years away. If the current understanding of the universe as infinite is true, then there are an infinite number of galaxies, but we can't see those farther than 13.7 billion light years away because their light hasn't reached us yet. Imagine astronomers in one of those galaxies 13.2 billion light years away looking at us with their Hubble telescope. To them we are at the edge of the observable universe, and they can't see the galaxies we can see in the opposite direction. And vice versa.

To Richard Sauder; It's natural to think we'll find a Singularity "Over There" if we look back far enough. Instead what we see as we look back farther are more and more galaxies and stars, filling in the background until we come to a time before the stars were formed. We have seen this; it's the Cosmic Background Radiation, which is in every direction, in an almost perfectly smooth distribution. We are inside what is left of the singularity that formed the Universe. Whether it was finite or infinite to begin with, it'll still look the same as we look out, and back in time. The appearance of the Universe will probably change, however, as the expansion speeds up, leaving the light and radiation from early times beyond our perception. Eventually we would see nothing but the old remains of the Milky-Andromeda combined Galaxy around us, with deep nothing in the distance!

Very nice description, Gaylon. One might add for Richard that farther back than approximately 380'000 years after the Big-Bang there was no "light", in the sense of the word. Last light we see is said background radiation, aka the universe igniting. What uplifting thoughts, Anthony, your last lines: beautiful! Hey, Bruce, I couldn't agree more, down to the last trillion! I share your last guess there. There's nothing like a little math in the morning. I do like the fraction you calculated for the XDF to represent of the whole sky! Isn't it amazing!? 13.2 billion years: there's only 0.6 missing! Wow!

Nice comments everyone. Anthony, I readily agree with your point about our only being able to count galaxies that are still inside our event horizon. How many may exist beyond it is indiscernible, of course. Your point about the universe being infinite I would question however. What is the reasoning behind “the current understanding of the universe as infinite?” If the number of galaxies were truly infinite then even 1 trillion galaxies would be a vanishing, infinitesimally small fraction of the ever indefinable total. Although I don’t have a scientific argument against the infinite universe notion, my differing opinion is shaped by something someone wrote long ago; “Raise your eyes high up and see. Who has created these things? It is the One who is bringing forth the army of them even by number, all of whom he calls even by name.” (Isaiah 40:26) This leads me to believe that the universe and the number of galaxies, stars, planets, etc. contained therein is, albeit incredibly humongous, still a finite (although also a continually changing) number.

One may argue that the term "infinity" is just a placeholder for the un-graspable in number. A shorthand, so to speak, to be able to handle, to think about, in our brains, the un-thinkable. One might coin further or different phrases or terms to say the "same". -- For all intents and purposes, 1 trillion is, by all means, inseparable from infinity, when imagining and/ or practice matters ... and, what else is there? -- Here we are, back again to linguistics, cognition per se! -- Also of interest and contribution may be what logics and mathematics have to say about infinities: there are different kinds: simple ones and higher ones and such (Gödel!). -- Can we think about the limits, the borders of our cognition? Yes. More so, about what lies beyond? Yes. Can we UNDERSTAND this? KNOW about this as well? Feel it? Grasp it? Or ... just name and possibly (man)handle it?)

Mike, in a friendly way I must call a foul on your last comment. You’re applying ‘fuzzy math’ to this question by blurring the definition of a very important mathematical concept. Since this is a scientific question, and the language of science is at it’s core mathematical, I think we should sick with the fundamental definition of infinity when asking, “Is the universe infinite?” I don’t think we should water down the meaning of the word here or elseware. The US national debt is now in the trillions of dollars, so if as you suggest, ‘1 trillion … is for all practical purposes infinite,’ then things are doomed for sure, because an infinite debt can never be repaid. As to rapping our minds around large numbers, I think intelligent people are quite capable, that’s what exponential notation was invented for.

The article mentions that we need to wait for the James Webb telescope to do longer wavelength IR research.

Wasn't ESA's William Herschel 16' IR telescope built for this sort of project? It seems not to have caught the public imagination like the Hubble.

It appears from their web site that it is open for anyone's research application.

I didn't realize there were 2 telescopes with the same name.