The Veil Nebula, an ancient supernova remnant that many amateur astronomers know as the Cygnus Loop, is one of the best-known deep-sky objects of summer and autumn nights. I'd bet it's also one of the least observed, despite its location in the prominent constellation Cygnus, the Swan. For one thing, the Veil is very faint. For another, it's very large — some 3° across. To get a good look at the whole thing you need a rich-field telescope, a really dark sky, and — if you want a really good look — a narrowband nebula filter. Alternatively, if you have a large-aperture scope, you can zoom in on small sections of the loop, three of which have NGC numbers: 6992, 6995, and 6960. 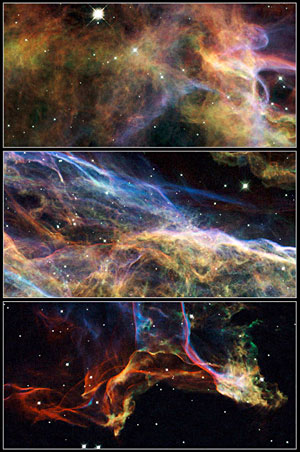 Three sections of the Veil Nebula in Cygnus, photographed by the Hubble Space Telescope. Emissions from oxygen, sulphur, and hydrogen have been colored blue, green, and red, respectively.

The 2.4-meter (94½-inch) Hubble Space Telescope, whose cameras afford a field of view barely 2½ arcminutes across, took the large-aperture, narrowband-filter route to produce unprecedentedly sharp views of three small pieces of the Veil. The individual exposures were captured back in the mid-1990s; only now have astronomers with the Hubble Heritage Project taken the time to combine them into color composites. Light from oxygen ions, sulphur ions, and excited hydrogen atoms is tinted blue, green, and red, respectively.

Some 1,500 light-years away, the Veil originated in a titanic supernova blast 5,000 to 10,000 years ago. The delicate filaments of glowing gas in the Hubble images (or in your eyepiece) are a mixture of stellar debris and interstellar matter swept up by the supernova remnant's expanding shell.

You can find larger versions of the images, a key diagram identifying the Hubble fields within the larger nebula, and related videos and other information at the Space Telescope Science Institute and the European Space Agency's Hubble Information Centre.