Hubble Looks into the Coma Cluster

The Hubble Heritage Project released this image on Tuesday of part of the Coma Cluster of galaxies in the constellation Coma Berenices. The cluster lies more than 300 million light-years away and appears near the Milky Way's north galactic pole, well above our galaxy's plane of gas and dust. It's one of the densest galaxy collections astronomers know of. 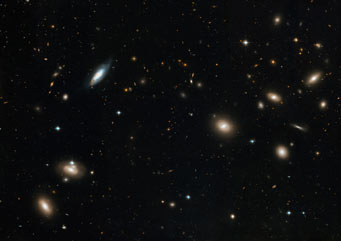 HST image of the Coma Cluster. The reddish tint to the spiral's arms may indicate past disturbances.

The image covers a section about a third of the way out from the cluster's center. It contains one prominent spiral galaxy (where star formation is ongoing in the bluish regions) and several elliptical and S0-class galaxies filled with old stars (golden tan). Background galaxies far behind the cluster also peek in, and some of them are greatly redshifted.

Edwin Hubble first separated galaxies into three main classes — spirals, ellipticals, and irregulars — in 1926 by how they appeared on photographs. Ellipticals look like spheres with varying degrees of squashed-ness. They are made up of only older, yellower stars because they have little of the gas and dust needed to create new ones. Spirals, like the Milky Way, have bright arms filled with dust and gas clouds and brilliant young stars that wind around a yellower (usually) central bulge. Hubble split this category into ordinary spirals and barred spirals, depending on whether the center was round or an elongated bar. Irregulars also have young stars but don't look like much of anything.

Ten years later, Hubble added the S0 class as a link between ellipticals and spirals. Like ellipticals, S0 galaxies consist of older stars, but unlike the featureless gold "fuzzballs," the S0s show vague structures such as bars, rings, or disks. 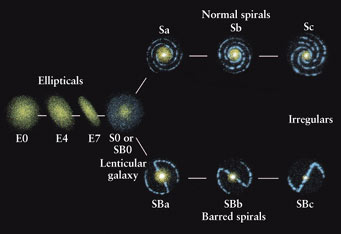 An illustration of the "tuning fork," which Hubble originally asserted was a model for galaxy evolution. Astronomers now know otherwise, but the diagram remains.

Astronomers now realize that the "Hubble type" does not correspond to a galaxy's age, but only whether star formation stopped. Nevertheless, Hubble's galaxy classifications and his "tuning fork diagram" portraying them have stuck.

What the HST image doesn't show is the superheated gas filling the cluster. Although the gas is invisible at optical wavelengths, it blazes in X-rays. Scientists think jets from the centers of some of the galaxies may keep the gas toasty, since it glows at a far higher temperature than expected for the cluster's age. The hot gas may also tear cold gas from the cluster's galaxies, depriving them of the material necessary to form new stars and leaving them with faded features.

For the full-resolution image and more information, see the European Space Agency's press release. The image is about 9 arcminutes wide (1.7 million light-years at the cluster's distance). Further image details are also on the Hubble Heritage site.

Certainly some of the stars could have burnt out. But a whole lot of others will still be burning – the Sun has another 5-10 billion years before it becomes a red giant, for example. None of the galaxies are going to burn out, just some of the pinpricks comprising them. The gigantic cluster itself should look relatively the same. Unfortunately, we'll have to wait another 300 million years to find out. cmc

you mean we can see it but its not really there?