NASA's upcoming service call on the Hubble Space Telescope won't happen till late September or early October. Until recently it had been scheduled to begin in late August. Rumors about the slip have been circulating for weeks. They were confirmed yesterday by Space Shuttle program manager John Shannon, as reported in the Houston Chronicle. 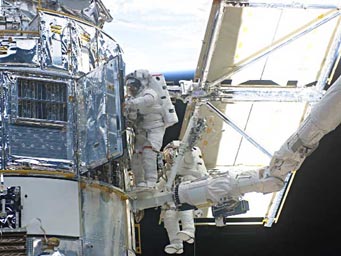 Astronauts John Grunsfeld (left) and Richard Linnehan work to replace some of the Hubble Space Telescope's electronics during the last servicing mission in March 2002. One of the spacecraft's solar-cell arrays looms at right. Grunsfeld is on the crew of the next servicing mission too, now scheduled to begin in late September or early October 2008.

As with most other launch delays over the history of the Hubble program, the source of the slip isn't the telescope — it's the shuttle. NASA needs more time to prepare two giant external fuel tanks for the mission, which will be flown on the shuttle Atlantis. Normally only one tank is needed. But if anything goes wrong during ascent, the astronauts won't be able to seek safe haven at the International Space Station, which is in a different orbit than Hubble. So NASA will have a second shuttle on the launch pad, poised to come to Atlantis's rescue if needed.

You probably remember that in 2004 NASA administrator Sean O'Keefe cancelled the upcoming servicing mission. He made the controversial move because of safety concerns after the February 2003 Columbia disaster. When Michael Griffin took over as NASA chief two years later, he reexamined the issue and concluded that servicing Hubble is actually no more risky than visiting the space station — as long as that second-shuttle-on-the-pad rescue option is available.

Why does Hubble need servicing again? After all, it's been repaired and upgraded four times already. Well, space is a harsh and unforgiving environment, with extreme temperature swings, an unending rain of meteoroids and high-energy particles, and other hazards. Hubble has been up there for 18 years now, and some of its critical parts — including the batteries that power its instruments through orbital night — are original equipment. So some amount of refurbishment is needed just to keep the telescope operating.

More important, though, is keeping Hubble at the forefront of scientific discovery. The way to do that is to replace old instruments with new state-of-the-art ones. So not only will Atlantis's astronauts deliver new batteries, gyroscopes, insulation, and other mechanical and electrical components, but they'll also install the Wide Field Camera 3 and the Cosmic Origins Spectrograph. These two new detectors will enhance the telescope's "discovery power" (the product of its areal coverage and sensitivity) by a factor of 100 or so, ensuring that Hubble will continue to reveal new cosmic wonders until — and even after — the larger James Webb Space Telescope goes into orbit around 2013.

You can follow preparations for the Hubble servicing mission at the STS-125 website (in NASA parlance, it's Space Transportation System mission number 125).

Terrific. The country's going broke. The costly war in Iraq drags on. The artic's melting. And world over, people are rioting because they can't afford to buy food. While Sky and Telescope celebrates spending millions and millions on a space telescope that can't possibly discover 1/100 of the "mysteries" of the universe, and won't "discover" anything that some other telescope won't "discover" 10 or 20 years from now.

Just because we have problems on planet Earth is no reason to throw up our hands and quit all scientific endeavor. In fact, it is scientific endeavor that solves a lot of problems in the long run. As for famine - that is a political problem explained quite well in P.J. O'Rourke's book Holidays in Hell.
Complaining, on the other hand, has never solved any problem. Volunteer work and charitable donations are much more effective. Not only will they benefit others, they also work wonders for chasing away the blues. Or, to quote Mr. O'Rourke, "Yes, there is misery and suffering in life. Stop adding to it."

(rough trnslation from my old article in Polish written and published after Columbia crash):

Such questions sounds like far echoes of old ideas claiming for unshaped happiness for all. Tell Me wheather space flights, exploration and study make us less sensitive and lower our compassion? Or if we are less right and less able to give? No. And maybe wheather by flying, exploring and studying Space we are wastening resources that could feed hungry people? In the contrary. Don't search our limitations in Space. Such a search make here, on Earth. Our limits are inside Us.

It seems to me that Hubble is one of the best things that NASA has ever done. In terms of dollars spent for information gained it has proven far more useful than any of the manned missions to the moon or the one to Mars envisioned by the guy in the White House who, mercifully, has only a few months left.