If NASA had kept to its original schedule, astronauts would have made their fifth and final mission to service the Hubble Space Telescope back in August. 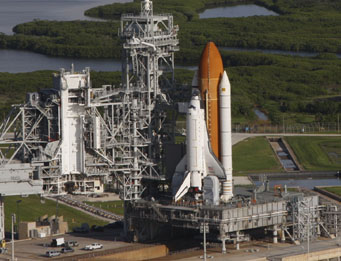 Space Shuttle Atlantis awaits launch at NASAâ€™s Kennedy Space Center in Florida. NASA has announced a delay to the long-awaited mission to service the Hubble Space Telescope, which was supposed to begin October 14, 2008.

It's a good thing they didn't.

The space agency announced today that an onboard communication problem has temporarily shut down the World's Greatest Telescope — and postponed the planned house call in orbit, scheduled to begin October 14th, until no earlier than next February or perhaps April.

The failure occurred in the Command Unit Science Data Formatter, an electronics package that moves digitized streams of data from the science instruments to spacecraft's digital tape recorder for later playback to Earth. The CU/SDF has worked great for 18 years, so faulty craftsmanship isn't the issue. Nor is the venerable space observatory in any real trouble.

The good news is the that Hubble's designers included a second unit for redundancy. As far as engineers know, it still works — but it hasn't been checked since before HST's launch more than 18 years ago. Changing from one to the other is entirely doable but a lot more involved than just throwing a switch from "A" to "B". So Hubble's handlers are dusting off the owner's manual to begin the process; that might be completed by early next week, at which point the observatory will come back online.

More weighty, for the moment, is whether replacing the defective unit should be added to the already jam-packed "to do" list for astronauts on the forthcoming servicing mission, STS 125. A spare CU/SDF does exist at NASA's Goddard Space Flight Center (which manages Hubble's science payload) and could be made flight-ready soon.

During a hastily convened briefing for reporters today, Preston Burch, Hubble manager at NASA-Goddard, noted that replacing the 136-pound unit, which is roughly the size of a two-drawer filing cabinet, should be "a relatively straightforward activity" that would add only about 2 hours to one of the mission's five planned spacewalks.

It'll take a few months to certify that the spare is flightworthy, but NASA officials seem willing to accept that delay. This means the Space Shuttle Atlantis, already on the launch pad at the Kennedy Space Center in Florida, will be rolled back into its shelter. So will a second shuttle, Endeavour, that's standing by just in case a dramatic rescue of the Hubble repair team had been necessary.

As detailed in Sky & Telescope's October issue, the STS-125 crew hopes to install two scientific instruments (the Cosmic Origins Spectrograph and a replacement Advanced Camera for Surveys), repair a third, and swap in new batteries, gyroscopes, and other components. The spacewalkers will also attach a mechanism to allow the docking of a rocket stage at some future date for Hubble's safe disposal.

Should the replacement data formatter prove unfit to fly (considered unlikely), the repair mission will be hustled back to the launch pad as soon as it can — probably in November.

"Hubble has a habit of coming back from adversity," notes Edward Weiler, who heads NASA's Science Mission Directorate. "This particular failure was anticipated 20 years ago, and we have spare hardware ready to go."

It stinks that the Hubble Space Telescope has had a major failure in it's comms system. But I not Very happy that the shuttle flight has been postponed...AGAIN!!!! The engineers should of expeted this because just like a car it will fail after about 18 years. So this delay makes very ANGRY.

I’m in favour of the delaying in the repair mission; this is the last time we get to tune up the old reliable and truly fantastically operating telescope that has brought hours of joy to all of those interested in the Universe. So it is truly a wise decision to wait and diagnose what is required to fix and keep the Hubble up and running until its replacement arrives in orbit. So hats off to those who planed the delay and do it right. The last thing NASA should do is perform the repairs and then find out it was not performed correctly.

How come Nasa doesn't develop a reusable space vehicle that can retrive faulty satelittes and bring them back to earth. A better way might have teh same vehicle place it in its cargo bay and let the astronaughts repair it in enclosed pressurized enviroment. The repairs can be done much easier and faster.

Nasa took the Hubble Telescope into space. Why, can't they bring it back for repair. That would give the technicians to
fix the communication problem, and the four parts the Astronaughts were to repair.

The news about the onboard communication problem is very disappointing. Certainly we all had been anxiously waiting for a very long time for the refurbishing mission to take place and now, so close to launch time to have to wait perhaps another half-a-year more is discouraging. But what is most disturbing about this event is that such a long delay increases the real chance that the entire mission will never take place. Political and economic winds have a way of canceling such a program by the stroke of a pen. It has happened to the Hubble refurbishing mission before. That�s why I was counting the minutes to the planned October launch.

In hindsight it seems that replacement of the Science Data Formatter would be an obvious task, given its age. But the fact that it wasn�t on the agenda makes me wonder what other crucial components are in need of replacement. What if this communications package is replaced and a month later another aging component fails and shuts down the telescope. Certainly we can�t replace all the components, but are there others that need to be considered?