The rumors that circulated in late January were true: The Bush Administration's proposed budget for fiscal year 2006 includes no money to service the Hubble Space Telescope. Outgoing NASA administrator Sean O'Keefe said as much at a NASA press briefing on February 7th, the day President George W. Bush delivered his latest spending plan to Congress. Without another round of repairs and upgrades, Hubble is projected to die in orbit in 2007 or 2008. 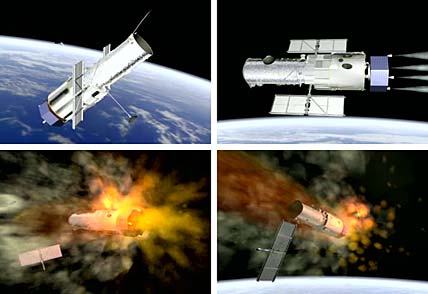 Whether or not NASA ends up servicing the Hubble Space Telescope again, the observatory will burn up in Earth's atmosphere early in the next decade. To make sure nobody gets hurt, NASA plans to attach a package of retrorockets to the base of the telescope and use it to steer the craft into the Pacific Ocean. These stills come from a 64-megabyte MPEG video on NASA's Web site.

The telescope's fate has been the subject of intense debate for more than a year. In January 2004, O'Keefe canceled the next planned Space Shuttle mission to the orbiting observatory, citing concerns over astronaut safety in light of the February 2003 Columbia disaster. The visiting crew was to replace Hubble's failing gyroscopes and batteries and install two powerful new scientific instruments, both already built at a cost of $160 million. The cancellation prompted an outcry by many astronomers, Congressional representatives, and members of the public, leading O'Keefe to agree to consider servicing Hubble again after all, but only if it could be done by a robot rather than by people.

In December a panel of independent experts convened by the National Academy of Sciences called Hubble "arguably the most important telescope in history" and said it definitely should be serviced again. But the group concluded that a robot capable of carrying out such a complex task would likely not be ready in time to save the observatory. Instead, they said the job should be performed by shuttle astronauts, as has been done four times already, and that a return to Hubble would not be significantly more risky than any other planned shuttle flight.

O'Keefe disagrees. "I cannot recommend that we proceed with such a mission," he said at yesterday's budget briefing. Rather than upgrade the telescope, NASA will do what it can to keep Hubble operating as long as possible by more prudent management of its power systems. The agency is also working on a method to control the telescope's aim with only two gyroscopes rather than the usual three. With luck Hubble will continue making observations well into 2008. Eventually NASA plans to launch a robot to attach a retrorocket to the telescope. It will be used to steer the school-bus-size spacecraft into the Pacific Ocean so that it doesn't spread debris over populated areas when it burns up in the atmosphere. Reentry is unlikely before 2013, so there's plenty of time to prepare for this less ambitious robotic mission.

Although O'Keefe appears to have slammed the door shut on Hubble, the telescope's fate will not be sealed until Congress has its say. Senator Barbara Mikulski (D-Maryland), whose state hosts both the Space Telescope Science Institute and NASA's Goddard Space Flight Center, has already announced her opposition to NASA's plan. "Hubble's best days are ahead of it, not behind it," she said in a prepared statement. "I will fight in the United States Senate this year to fund a servicing mission to Hubble by 2008." It remains unclear who will climb into the ring with her. O'Keefe leaves NASA on February 21st, and President Bush has yet to name a successor.