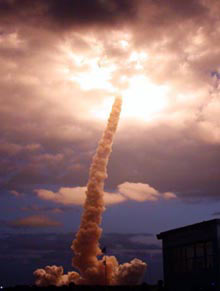 The Space Shuttle Columbia rockets into the predawn sky at 6:22 a.m. Eastern time on March 1, 2002. After meeting up in orbit with the Hubble Space Telescope, the crew will make several upgrades to HST — including the installation of the Advanced Camera for Surveys.

Editor's Note: The space shuttle Columbia launched from Kennedy Space Center at 6:22 a.m. Eastern time on March 1st. This dispatch from astronaut John Grunsfeld was written the day before he headed to orbit. SkyandTelescope.com will post Grunsfeld's Hubble-repair diary throughout the shuttle's mission.

February 28, 2002 | The space shuttle Columbia sits ready on the launch pad at the Kennedy Space Center, with a payload bay filled with the Advanced Camera for Surveys (ACS), new solar arrays, a reaction wheel, power system components, and a new scientific instrument cooling system for the Near Infrared Camera and Multi-Object Spectrometer (NICMOS). Our mission, STS-109, will execute a rendezvous and capture of the Hubble Space Telescope, five space walks to install the new hardware, and a deployment of the Hubble. When we release the Hubble, its discovery potential will be significantly increased, and its systems will have been upgraded allowing it to last another decade or more, making it almost better than a new telescope.

This is a mission for which I feel that I've trained my whole life to perform. As I look back at my education as a physicist and astrophysicist, my research using ground- and space-based telescopes, and my adventures in the mountains of planet Earth, I see many aspects of those experiences that will help me on this mission. Going on a space mission is much like an expedition to a remote area of planet Earth, although the ride to orbit, at eight and a half minutes, is much shorter than most trips in the family van. 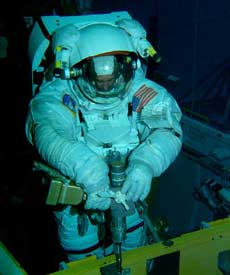 John Grunsfeld is seen here underwater during one of his many prelaunch training sessions in the Neutral Bouyancy Lab.

Scott Altman, a Commander in the U.S. Navy, and an aeronautical engineer on his third space mission, is our mission commander. The pilot is Duane Carey, a Lieutenant Colonel in the U.S. Air Force, and also an aeronautical engineer, on his first space mission. I am the payload commander, responsible for the Hubble operations and the training and execution of the five space walks, on my fourth space flight. I will perform three of the space walks with my partner Rick Linnehan, a veterinarian, on this his third mission. Jim Newman leads the team for the second and fourth space walks. He is also a physicist, and is on his fourth space mission. His partner will be Mike Massimino, a mechanical engineer on his first flight. Rounding out the team is flight engineer and robotic arm operator Nancy Currie, a Colonel in the U.S. Army and an industrial engineer, on her fourth flight.

When I started training in 1997 for the original Hubble Space Telescope Servicing Mission 3, our plan was to replace the solar arrays, install the ACS, the new cooling system for NICMOS, the Fine Guidance Sensor (FGS), and some small electronics boxes to improve the Hubble systems. However, failure of the Hubble gyros, which allow Hubble to point precisely, required that we split the mission into two parts, mission SM-3A, and SM-3B. In December 1999 I flew to the Hubble Space Telescope for SM-3A/STS-103 on Space Shuttle Discovery and installed all new gyroscopes, the FGS, a new computer, and replacement electronics, during three space walks. I am thrilled to be able to return to Hubble with a new crew and complete our original mission to significantly enhance the science capability of the telescope.

On the STS-103 mission to the Hubble, I had the opportunity to pen and transmit dispatches to planet Earth describing the team's experiences. STS-109 promises to be a challenging and busy flight. Nevertheless, I plan to write about our adventures with the Hubble and send them down allowing astronomers and space fans to follow the mission. I hope that through these dispatches I can convey a sense of the challenges we face while on orbit and the excitement we will experience in upgrading the Hubble Space Telescope. Of course, the real excitement will occur when the first images from the Advanced Camera for Surveys come down from the Hubble Space Telescope.