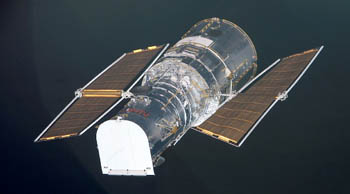 The Hubble Space Telescope awaits its capture and repair as the crew of the Space Shuttle Columbia slowly approaches on the morning of March 3, 2002.

"A firm handshake with Mr. Hubble the telescope." Those were the historic words from the crew on the first servicing mission of the Hubble Space Telescope almost 10 years ago. Hubble is now firmly held in the berthing ring in the payload bay of Columbia, and the telescope is still a beautiful sight after nearly 12 years on orbit.

Early in the day, as we slowly advanced on HST, the orbiter crew continued the task of preparing Columbia for our rendezvous and grapple. Of course slowly is a relative term, as both the Hubble and Columbia are orbiting the earth at about 17,500 miles per hour. As we approached the telescope, Scott Altman fired reaction control jets to slow our rate of closure. Each time one of the jets in the nose of the orbiter fires, it sounds like a cannon blast, and everything in the cabin shakes and vibrates. With a 100-plus-ton spaceship it takes a lot of punch to move it around, even in free fall.

While the flight crew was flying Columbia, the space-walking team was preparing the space suits and tools for our first EVA. With four suits, hundreds of tools, and four space walkers on the middeck of Columbia, space seemed awfully small. The middeck, or bottom floor of the Space Shuttle, is only about 10 feet by 5 feet in size. All of our space suits checked out fine, and as we performed all of the procedures my excitement of going outside of the shuttle dramatically increased. We now have Rick Linnehan's (my space-walking partner) and my space suits ready to go out for a "walk."

When the Hubble was a few miles away I was able to see it clearly with a set of binoculars. I truly felt like I was close to visiting an old friend again. Scott slowly brought the shuttle in close, with Duane Carey backing him up. Jim Newman was on the laptop computer providing situational awareness calls from a program that displays our trajectory on the computer screen. Rick manned the hand-held laser, as used by police to catch speeders, to monitor the distance to Hubble. Nancy Currie and Mike Massimino prepared the robotic arm to reach out and grab HST. My job was to work the Hubble communication procedures, which also allowed me to take pictures of HST on approach.

Once Scott had flown the HST into range of the shuttle's robotic arm, Nancy, an Army helicopter pilot, flew the end of the arm on to a special grapple fixture on HST and captured the Hubble. There was much rejoicing on Columbia. Scott really did a fantastic job of flying the orbiter up close and personal to Hubble — it was a thing of beauty to watch.

The rest of the day went quite well, berthing the Hubble into the payload bay of Columbia and driving the latches to hold it firmly in the bay. After charging up HST's batteries in the orbital day, we began the process of rolling up the second-generation solar arrays. There was some trepidation as the arrays began rolling up, as one of the first-generation solar arrays on the first servicing mission failed to roll up and had to be jettisoned during space walking activities. Fortunately both arrays rolled up smoothly and without problems, and we all gave a collective sigh of relief (I think we even heard the engineers on the ground at Houston and in Baltimore, the home of the telescope control center, sigh with us). I'm sure there was much jubilation on the ground.

The hard work has just begun however, as we have 5 days of challenging space walks ahead of us, starting with replacement of one of the solar arrays tomorrow. I look forward to giving my old friend the Hubble a hug, and getting on with the hard work of making the telescope better than it's ever been before. 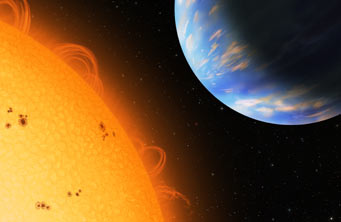 Crash Scene in the Asteroid Belt